This post has been updated. Apple reported solid fourth quarter results today, reporting $51.5 billion in revenue—slightly more than expected—and 48 million iPhone shipments. More importantly, its forecast for the holiday period was about as expected—a deceleration in growth. Shares initially traded up slightly after hours, then down slightly, but there were no big surprises.

We live-charted Apple’s report this afternoon. Here’s a visual representation of its results. 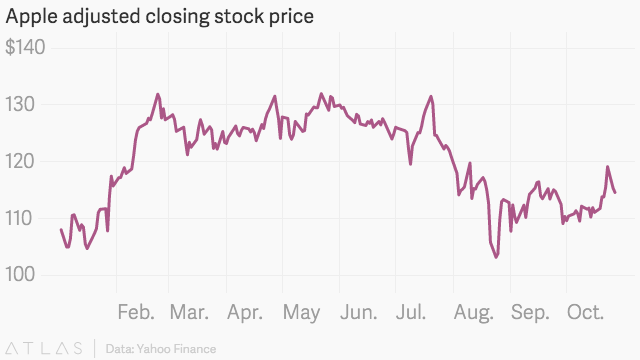 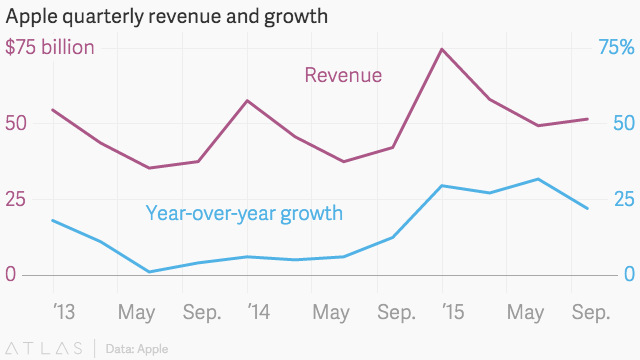 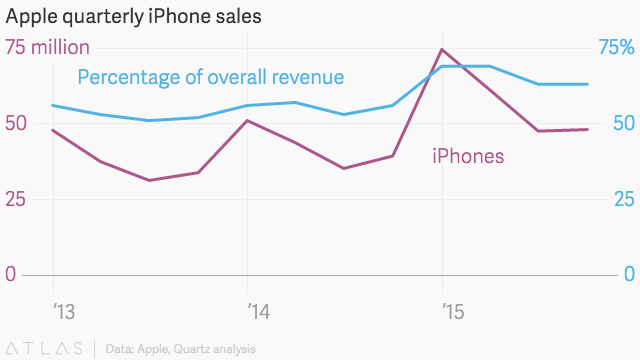 4:42pm: Apple, once again, did not disclose how many Apple Watches it sold during the quarter. But “Other Products,” the line where Apple reports Watch revenue, grew to $3.05 billion, up $1.15 billion from the same quarter last year. The trend is unmistakeable. (But only up about $400 million from the prior quarter.) 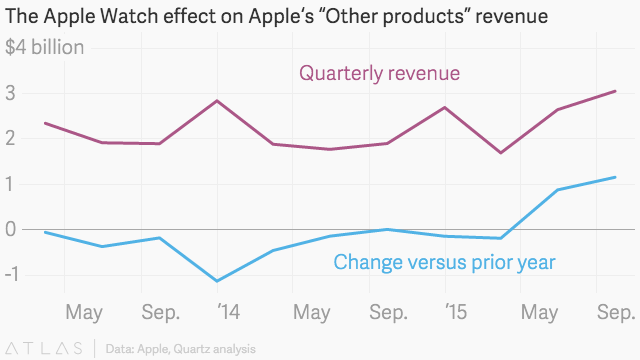 4:47pm: Apple’s growing China business continues to outpace the rest of the company. Last quarter, Apple generated $12.5 billion in revenue in Greater China, representing 24% of its total revenue. China sales grew 99% year-over-year, surely aided by the relatively early launch of the iPhone there this year. 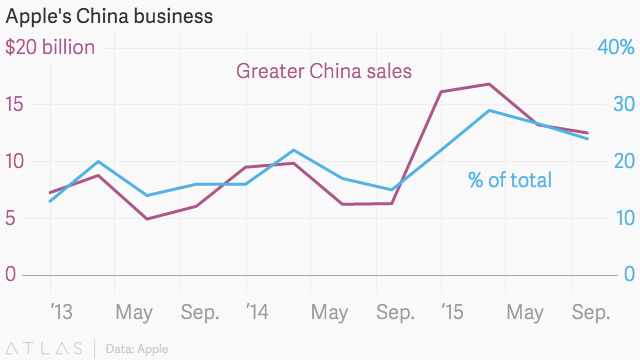 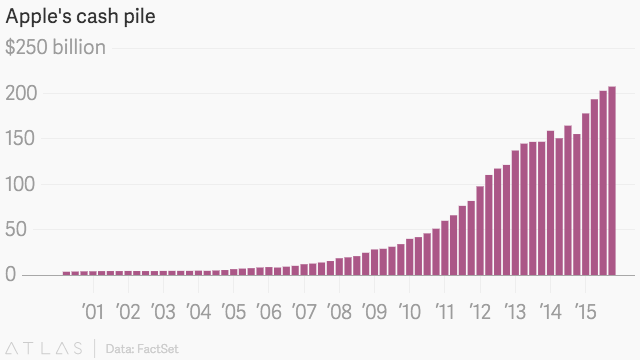 4:51pm: The iPad remains a question mark for Apple. Shipments declined to 9.9 million last quarter, down 20% year-over-year. It’s still a business most companies would be jealous of, generating $4.3 billion of revenue during the quarter. But it was the first time Apple shipped fewer than 10 million iPads in a quarter since the June 2011 quarter. 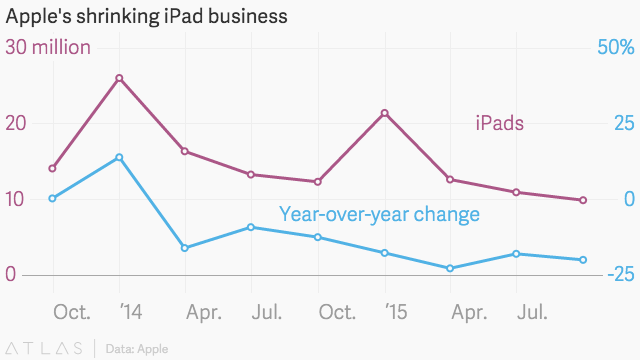 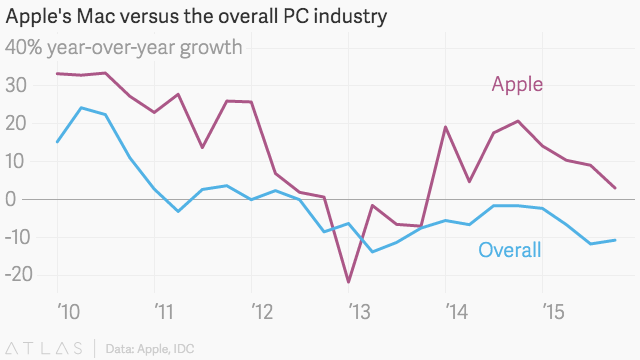 5:05pm: The average price paid for an iPhone inched up to $670, up almost $70 from a year ago. This is likely because of several factors, perhaps including increased popularity of the more-expensive, larger “Plus” iPhone, and more people avoiding the cheapest, 16 GB models. iPad prices increased slightly. (And probably won’t change much when the expensive, niche iPad Pro ships later this year.) 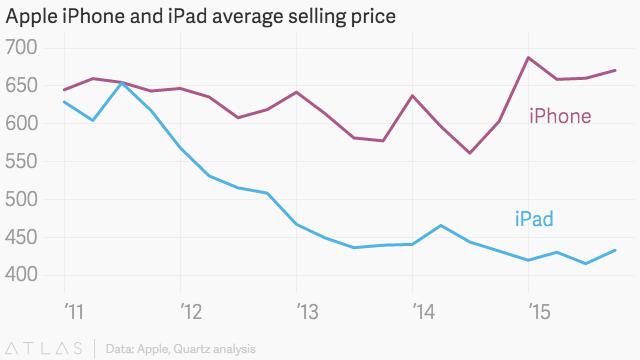 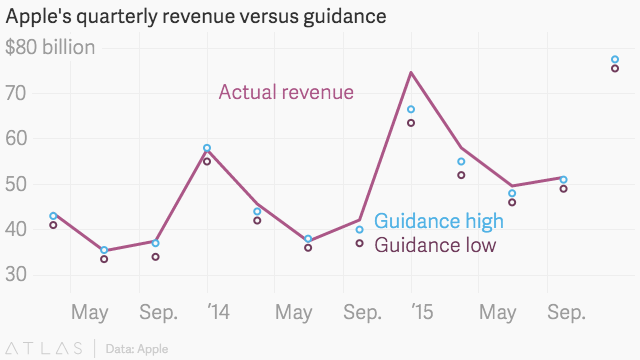 Its forecast for the all-important December quarter was in line with expectations: Apple predicts it will generate $75.5-77.5 billion this quarter. This would represent modest, slowing growth, relative to prior quarters. Last year, Apple reported $74.6 billion in December quarter revenue. So its midpoint guidance this time, $76.5 billion, would imply just 2.5% growth. That’s a big deceleration from the past four quarters, where growth has been in the 20s and 30s, percentage-wise. Shares are up 1.3% in after-hours trading. (Later on the earnings call, Apple CEO Tim Cook noted that foreign currency woes are significantly affecting its “growth” prospects.) 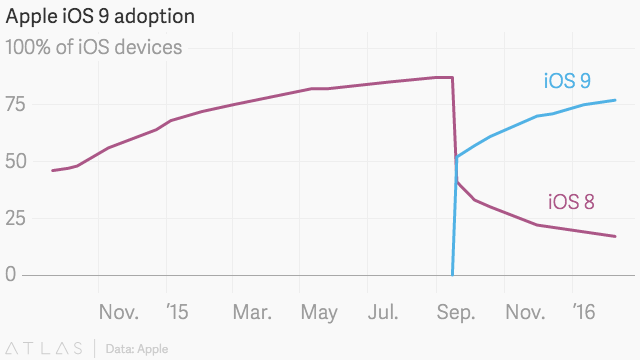 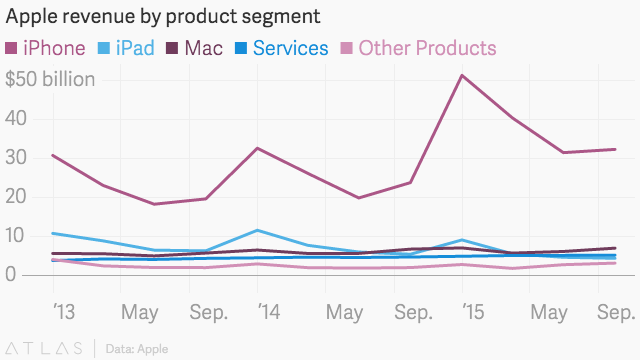