Twitter’s had a tough time convincing people to sign up for accounts. Now it’s moving on to plan B: make money off non-users who see its tweets.

CEO Jack Dorsey revealed today (Oct. 27) that the company will begin a pilot in the fourth quarter to show ads to “logged-out users,” or people who don’t have accounts or aren’t logged in but nonetheless see its tweets.

For more than a year now, Twitter’s been making the case that its user base is much bigger than its quarterly numbers suggest. Reporting the company’s third quarter earnings today, Dorsey said Twitter has more than 500 million logged-out users as well as 1 billion unique monthly visits to sites with embedded tweets. Back in September, chief financial officer Anthony Noto even went so far to say that Twitter’s audience is larger than Facebook’s 1.5 billion users, when you take these additional figures into account.

But as far as monthly active users go, Twitter just reported yet another quarter of disappointing growth. It added only 4 million new users, ending the third quarter with 320 million monthly active users. The company’s stock is down 13% in after-hours trading. 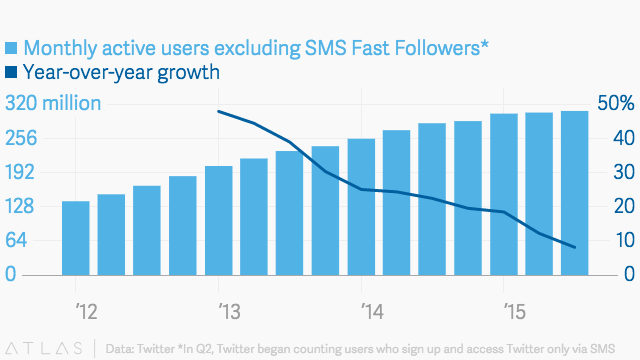 Past remarks about the size of Twitter’s user base seemed mainly focused on placating investor anxiety, but Dorsey may also be trying to show investors that the company’s success won’t be tied solely to user growth. The social network has extremely high brand awareness—Twitter handles and hash tags have become a ubiquitous part of TV and other ad campaigns—and the company is adamant that it can make money off that, even if it can’t convince people to actually sign up for the service.