We’re supposed to be living in a “post-PC” world, but Apple’s Mac computer line just won’t die. On its quarterly earnings call Oct. 27, CEO Tim Cook said Apple had a record quarter for Mac sales, selling 5.7 million Macs—a million more than last quarter—even as the overall computer market continues to shrink. On the other hand, iPad sales sunk to their lowest level since June 2011, with Apple shifting just 9.8 million this past quarter. 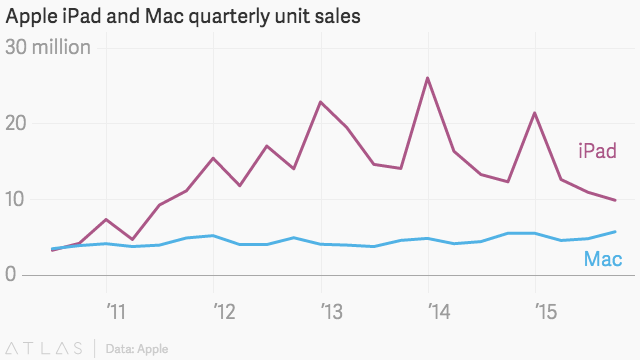 While Apple is still selling more iPads than Macs, its computer sales are slowly creeping toward its tablet’s numbers. Each holiday quarter for the last few years, the iPad has seen a spike in sales, but will that happen this coming quarter? The iPhone accounts for roughly two thirds of Apple’s sales, and now that it makes the oversized Plus model, customers may be less likely to upgrade their iPads. Apple acknowledged this on the call, with Chief Financial Officer Luca Maestri saying that Apple will now recognize the deferred revenue of iPads over three years, instead of two.

On the other hand, Apple will release the 11-inch iPad Pro in November. Consumers wanted a larger iPhone, and responded accordingly when one was available. Even though Steve Jobs was not a fan of styluses, perhaps the market for a larger, more powerful iPad is there. Cook also mentioned on the call that Apple has “quietly” been building a $25 billion enterprise market over the years—IBM is now buying tens of thousands of Macs—and that each new release of iOS has more enterprise features. An iPad with a keyboard—one you can actually take notes on—might be of use to that market. 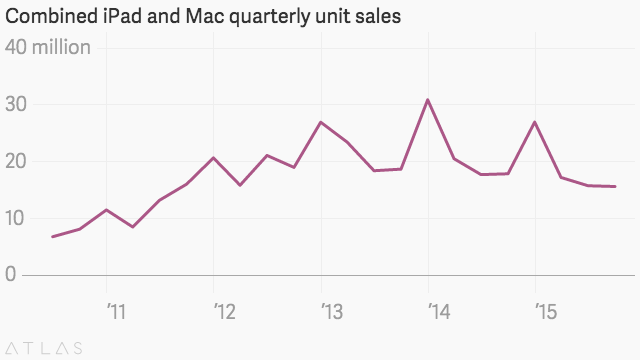 Either way, Apple probably isn’t too worried. Cook said in 2013 that Apple’s “core philosophy is to never fear cannibalization, adding: “If we don’t do it, someone else will.”