Amazon has been making a hard push into fashion over the last few years, but its efforts have encountered some obstacles. While books and small electronics do very well on the e-commerce site, not all clothing brands, and especially not the upscale ones, want to sell their wares there.

But Amazon is still selling a lot of mid-tier fashion, and if there are gaps in its offering, perhaps its time for the company to just fill them itself. As BuzzFeed reports, Amazon is in fact considering creating its own fashion line, according to Jeff Yurcisin, the vice president of clothing at Amazon Fashion and CEO of Amazon-owned Shopbop.

“For Amazon, we know our customers love brands, many of the brands in this room,” Yurcisin said, addressing the attendees at WWD’s Apparel and Retail CEO Summit on Oct. 27. “When we see gaps, when certain brands have actually decided for their own reasons not to sell with us, our customer still wants a product like that.” Amazon, he said, may create private lines to satisfy those wants. (It isn’t clear what kind of fashion Amazon would delve into, yet.)

A proprietary clothing line could offer Amazon a major boost, considering that it’s already on track to become the largest clothing retailer in the US in the next few years. A recent report by financial firm Cowen and Company predicted that Amazon will surpass Macy’s as the lead seller of clothes in the US in 2017. 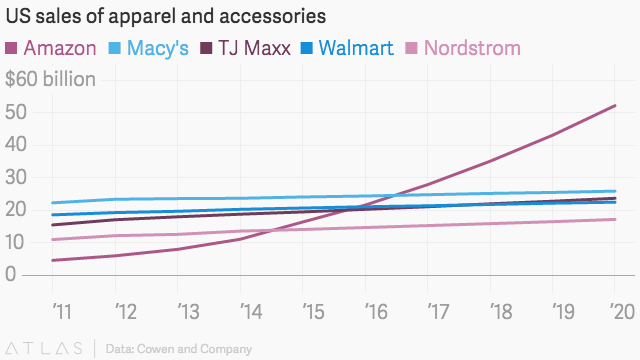 Private label brands can be highly lucrative. Mike Karanikolas, co-founder and co-CEO of fashion retailer Revolve, which predominantly sells mid-tier labels and does more than $400 million in annual sales, says Revolve’s own brands have been extremely successful for them, growing at roughly 600% year-over-year.

It’s not the first time Amazon has hinted at starting its own labels, either. Two sources at Amazon India, where Amazon has also been making a big play for the fashion market, told the Times of India earlier this year that they’re currently recruiting for just such an endeavor.