GoPro, the camera company most associated with people filming themselves while doing extreme things, released a less-than-stellar quarterly earnings report today (Oct. 28) and Wall Street took it badly. The company’s share price quickly sank to its lowest point since its IPO in June 2014. 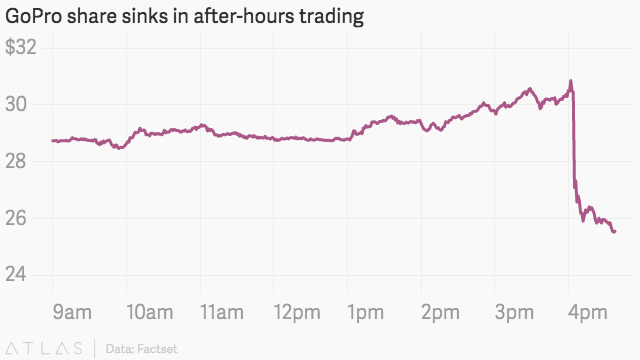 GoPro reported revenue of just over $400 million for the quarter, which is up 43% on the same quarter last year, but over $33 million less than what Wall Street was expecting. CEO Nick Woodman said that he was proud of the company’s progress over the last year, but added ”our business in the third quarter was clearly more difficult than anticipated.”

At the time of writing, GoPro’s share price was about $25—only about a dollar more than its original IPO price.

GoPro was instrumental in bringing portable cameras to places that they previously couldn’t go, from skate parks to ski slopes to scuba diving trips. But GoPro hasn’t innovated enough, at least as far as Wall Street is concerned.

Morgan Stanley analyst James Faucette warned that this quarter’s results would be weak, reported Fortune, that as GoPro’s most recent camera, the minuscule Hero4 Session, has not been well received. GoPro launched the camera—which didn’t have an LCD viewscreen or as many features as its other Hero4 cameras—in July, and reduced the price by 25% in September. 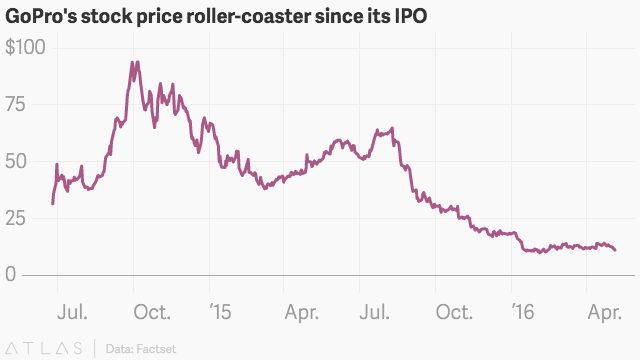 The cameras in our smartphones are getting better every year, and GoPro may well have already sold an extra-hardy camera to every extreme sport enthusiast who wants to document his or her exploits. To move forward, GoPro will need to diversify.

The company is moving into virtual reality hardware, partnering with Google on a 16-camera VR array, and plans to release a consumer drone in 2016. Today, the company revealed a sneak peek of GoPro drone footage:

But the company’s VR rig will likely remain a niche product for professional videographers, at least for now. And with stiff competition from incumbents like DJI and Parrot in the consumer drone market, as well as the Federal Aviation Administration’s continued feet-dragging on regulations for using drones in the US, it’s not the easiest market to jump into.  GoPro will need even newer and more surprising tricks if it hopes to wow watchers as much as the videos shot on its action cameras do.