Coming off a record year, Starbucks is on target to break $20 billion in annual sales in 2016. As the Seattle Times noted, that’s enough to buy a tall latte for everyone on Earth.

Business at the world’s largest coffee chain is flourishing thanks to new menu additions, new locations, and expanded services, such as the ability to pre-order drinks with the Starbucks mobile app in the US. (It’s now in the process of rolling out order-ahead options elsewhere.)

The Seattle-based company posted $19.2 billion in global sales in the fiscal year ended Sept. 30, a 17% increase from the previous year. Sales at locations open for at least 13 months rose 7%, reflecting both increased customer traffic and higher spending per transaction.

Starbucks’ revenue is still far below that of McDonald’s, the world’s biggest fast-food chain by sales, which also made big menu and service changes this year, including the addition of all-day breakfast. But the coffee chain has been closing the gap, a trend helped along as McDonald’s and other fast-food brands struggle to compete with fast-casual dining and adapt to the needs of more health-conscious consumers. 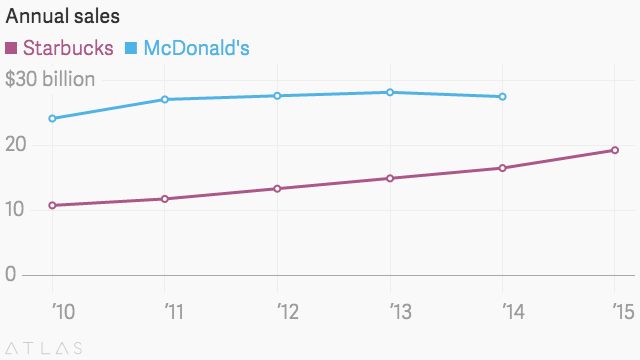