In case you were wondering, there’s still very little indication American workers are getting meaningful raises.

The latest numbers, a broad Bureau of Labor Statistics report on wage and benefit costs, showed that in the third quarter compensation for all workers was up just 2% from the same period in 2014.

“We continue to think that compensation will pick up as the labor market tightens, but there has been limited evidence of firming wage inflation,” wrote analysts from JPMorgan Chase.

This is an old story. Despite some ups and downs over the decades, US household incomes have been roughly stagnant for a quarter century.

The interesting thing, is that despite the persistent weakness of US wage growth, the US consumer economy seems to doing pretty well. Real US consumer spending grew at about 3.2% in the third quarter, according to GDP data released earlier this week. That’s not terrible. (And it’s much better than the outright declines seen during the worst of the Great Recession.)

How can incomes be more or less stagnant, and spending be growing? Well, a couple things. While nominal incomes are pretty flat, real—that is, inflation-adjusted—incomes are actually pretty good, thanks to sharp decline in gasoline and other energy prices.

But there’s another thing to remember. American consumption—which accounts for roughly 70% of GDP—doesn’t depend on wages. And it hasn’t for decades. America runs on credit. And in the sectors that are doing very well, like auto sales, consumers are finding it easy to borrow. (Perhaps too easy.) Case in point, after years of cutting back, credit card debt is growing smartly again. 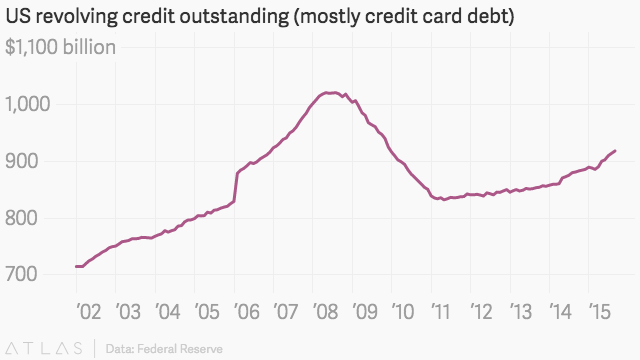 A lot of people find America’s debt-fueled consumption pattern offensive for moral reasons. Or they think that the US economy will inevitably suffer a debt bust similar to the one that brought on the financial crisis in 2008. Maybe. But, even so, it’s important to know that if you’re watching wage growth to understand the behavior of US consumers, you’re doing it wrong.