The number of refugees and migrants crossing the Mediterranean this year broke another staggering record: Roughly the same number of people arrived in the month of  October as in all of 2014, according to the United Nations’ refugee agency (UNHCR). 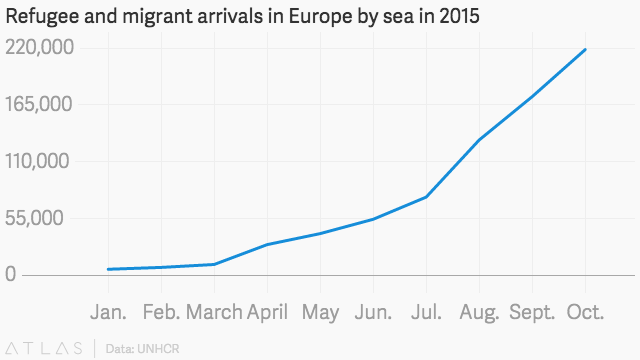 The majority of new arrivals are now coming through Turkey to Greece, rather than via Libya to Italy, a previously popular route. More than half of those arriving in Europe are Syrian refugees fleeing the country’s civil war. The huge influx, which continues to confound experts estimates, is continuing despite the worsening weather as winter draws near. 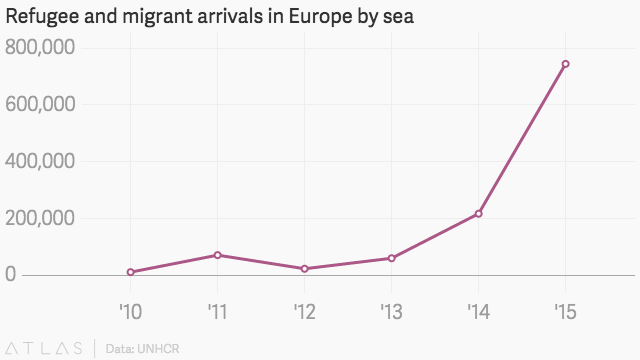 More than 3,400 people have died this year making the dangerous journey, according to UNHCR. On Monday, Greek authorities said four refugees drowned off the island Farmakonisi, while 11, including 6 infants, drowned on Sunday off Samos. Last week, a wooden sailboat packed with 300 people sank off the island of Lesbos, killing 30.

“Turkish smugglers taking advantage of those desperately fleeing the horrors of war in Syria, Afghanistan, and Iraq promised the victims that the trip aboard a  “yacht”  would be safer than the more common trips in overloaded rubber dinghies.” He adds: “But just as outrageous is the reality that months into Europe’s refugee crisis, Europe’s leaders still have not taken the steps necessary to help prevent such unnecessary tragedies, let alone adopt policies that could provide people fleeing war and repression with legal and safe alternatives to seek asylum in Western Europe.”