But upon closer inspection, America’s religious ties are actually fraying much more than this one data point would indicate. An exhaustive new religion report from the Pew Research Center yesterday (Nov. 3) shows that, despite the steadiness of the percentage of Americans who believe in God, religious interest is declining quite steeply by a number of other measures.

Pew’s new report—which surveyed 35,071 people in 2014, and encompasses the second half of findings released in May—can be juxtaposed with the group’s similarly sized 2007 study on the same topic. Americans who are “absolutely certain” in God’s existence have decreased by eight percentage points in the intervening time. Religiously unaffiliated people now make up 23% of the adult population, compared to 16%; even among the pious, regular service attendance is faltering.

When sorted by generation, the contrasts get even starker. Younger Americans, by some measures, are almost twice as likely to be uninterested in religion as their parents and grandparents. For instance: only 27% of millennials attend weekly religious services, versus 51% of adults in the Silent Generation (those aged 70 to 87). Emphasis on the importance of religion is also lagging.

The wide difference in generational religious interest is explained in part by people’s tendency to care more about religion as they age—a caveat Pew has carefully noted. But even so, the research group finds that younger people nowadays aren’t showing the same increase in religious fervor when they get older as past generations did.

“As older cohorts of adults … pass away, they are being replaced by a new cohort of young adults who display far lower levels of attachment to organized religion than their parents’ and grandparents’ generations did when they were the same age,” wrote the authors of the report. 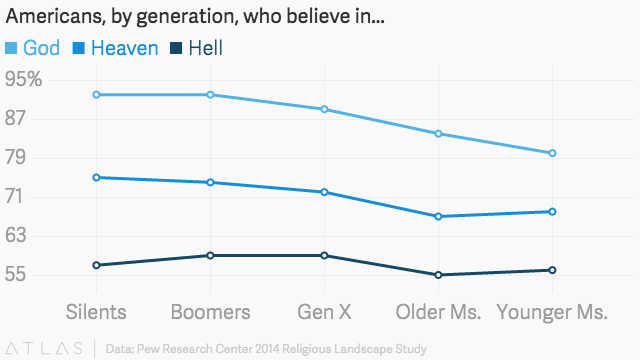 Earlier this year, researchers at San Diego State University examined long-term trends from as early as 1966 and came to a similar conclusion. “Our [study] is able to show that millennials’ lower religious involvement is due to cultural change, not to millennials being young and unsettled,” said lead author Jean Twenge. It underscored the idea that today’s young Americans may be less religious than any other young Americans in the past six decades.

Why? A number of things have been scrutinized as potential reasons for religion’s decline in the US. Among them are social cynicism, disorganization within churches and other institutions, increasing political polarization, and the rise of the internet—though no one has definitively tracked the effects of these factors. Twenge tells Quartz that “our increasingly individualistic culture, which emphasizes the self over social rules” is also an influence on the change. But one thing is for certain: Once people shun religion, their children are likely to also be faithless.

“Instead of luring back those who were once part of a religious community, [faiths] now face the prospect of trying to attract those with no formative religious experiences to draw on,” said Daniel Cox, research director of the Public Religion Research Institute.

But religious organizations aren’t in danger of dying out anytime soon; the US is still much more devout than many other advanced industrial countries. In Western Europe, where morality is less linked to faith and many religions have a much longer and bloodier history, only one in five people say religious faith is an important part of life.