The Chinese Community Party’s decision to end its infamous one-child policy has significance beyond its impact on the country’s demographics. What was missing from all the discussion and reflection on the policy’s impact on the size of China’s labor force and on families’ human rights was the positive consequences of the population control policy—particularly for girls’ education.

The one-child policy, introduced in 1978, opened up educational opportunities for urban girls. Before its introduction, large families invested a little in each child, or prioritized their resources in favor of sons rather than daughters.

But when parents were restricted to having only one child—and if it happened to be a girl—she benefited from being the focus of all their aspirations and investment. According to a 2002 study, urban families had equal educational expectations for both boy and girl children, and invested in the schooling of their only child—no matter what the gender. 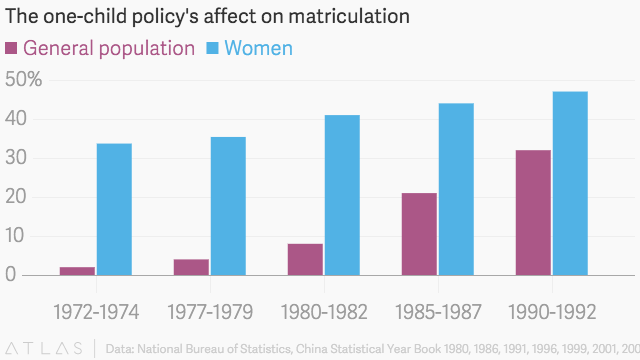 I have selected two age cohorts representing generations before the one-child policy was introduced in 1978, and three cohorts covering the “one-child generation.” For those born before the introduction of the policy, women accounted for around 30% of the total higher education population: men had twice as much representation in higher education than women. This increased to 41% for the 1980-82 cohort and nearly 50% for the 1990-92 cohort. It is clear that the policy was accompanied by a steady increase in women’s participation in higher education.

Members of the one-child generation have been subject to criticism for being little “emperors” or “princesses” living in 4-2-1 families with four grandparents, two parents, and one grandchild. Their so-called “individualism” is often linked to the erosion of traditional Chinese culture.

I’ve found that the one-child generation is anything but socially irresponsible. I have been conducting in-depth individual interviews with women and men from the one-child generation who were enrolled in higher education for the past nine years. My upcoming research illustrates a different picture from the widely circulated perceptions on the “little emperor cohort.”

The 24 siblingless women that I interviewed at eight universities across East China in 2007 generally had high aspirations, regardless of their socio-economic and cultural backgrounds. They were more socially engaged in environmental activism—such as promoting the importance of recycling, saving water, and raising awareness of air pollution—than both the 18 siblingless men who I interviewed, and 24 other women who didn’t come from a one-child family.

The women without siblings were also more politically active at university: more applied for Chinese Communist Party membership than their peers. Out of these 24 women, 20 had applied for membership, compared to 13 of the women from multiple-child households, and five of the male students. The women from single-child households explained that their higher level of political activism was adopted to minimize the social and gender disadvantages that they expected in the transition to the labor market.

The one-child generation has also been linked to the weakening of patrilineal culture—where property and wealth is passed through the male side of the family. This resulted in urban-based parents providing equal aspirations and investment in their daughters, so creating a generation of women with higher education degrees.

Urban women could miss out

When the two-child policy comes into force in China in 2016, those most affected are likely to be urban women. The rural areas will probably be largely unaffected since rural residential status already allowed couples to have more than one child. But in the cities, where China’s insufficient provision of social welfare, maternity leave, and childcare is most acutely felt, this highly educated generation of women living in cities could start losing out on competitive careers and promotions.

And if families have one boy and one girl, it’s likely the families will invest more in the boy’s education and aspirations: China is still a patriarchal society with a strong preference for its sons. The gender equality achieved in urban families during the one-child generation may cease to exist.