Facebook now boasts 1 billion people who visit the social network everyday and 1.5 billion who do so every month. But, having become so large, the question is where any substantial user growth will come from in the future. The answer appears to be Internet.org—Facebook’s initiative to bring internet access to people in developing countries.

There’s the obvious business motive behind Internet.org, but there’s little question that Facebook CEO Mark Zuckerberg believes in the internet’s ability to usher in social and economic changes. But, for all its lofty aspirations, Internet.org has by all accounts been providing a subpar and walled-off online experience, which does a disservice to the very people it purports to help. To deliver on its promise of economic mobility, that needs to change.

With new-user traction slowing in North America and Europe, Zuckerberg has set his sights on Asia as well as Africa, the Middle East, and Latin America (the latter of which Facebook collectively buckets under “Rest of world”). 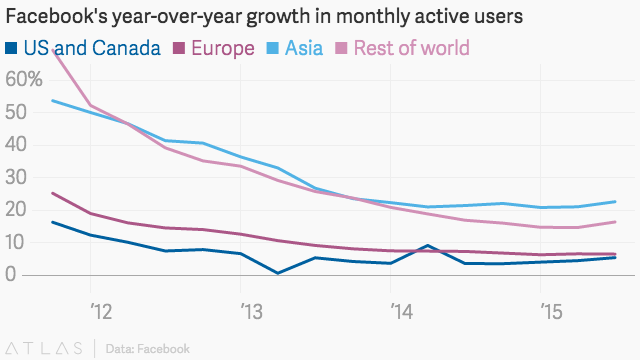 Reporting the social network’s earnings on Nov. 4, Zuckerberg singled out India—where about 1 billion people currently don’t have internet access—as the country ”that benefits the most from connectivity.” He went on to highlight the progress Internet.org is making there. “There are already more than 1 million people [in India] who now have access to the internet who didn’t otherwise because of our efforts,” he touted to investors in a call.

To illustrate what that number means, he pointed to research from Deloitte, noting that ”one person gets lifted out of poverty and one new job gets created” for every 10 people who come online. By that measure, Facebook’s played a role in helping at least 100,000 Indians climb out of poverty and creating that many jobs. ”If you don’t have access to a good school, then getting basic internet access can be your best educational information,” he continued.

This, of course, implies that poor children are able to overcome the bleak lives they were born into thanks to the internet, even an internet that doesn’t function particularly well. But as Mahesh Murthy, an Indian investor and entrepreneur, points out in a piece for Quartz: “if Zuckerberg—himself a child prodigy—ever was brought up on internet.org, he couldn’t have ever built a Facebook.”

Reaching the next billion people coming online is why Facebook is so heavily invested in deploying internet-beaming drones, lasers, and satellites, and why it’s partnered with local telco providers in 29 countries to offer free access to parts of the internet. The decision is at least partly driven by profits, with Facebook developing ad formats for slower connections. Just last week, it showed off a new ad product called Slideshow, a carousel of images, to make up for the fact that video—the most engaging and expensive online ad format—doesn’t render well over 2G, the wireless speed most prevalent in the developing word.

In India, the company has partnered with the carrier Reliance to offer free access to Facebook (excluding photos) and a select number of sites. This model essentially makes Facebook a gatekeeper to the internet for people in developing countries, many of whom are likely coming online for the first time. So-called “zero-rating” services have been criticized for violating net neutrality—principles that prohibit internet service providers from favoring, slowing, or restricting access to particular sites—and for threatening free speech and innovation. In India, the service has also been slow, spotty, and unreliable, contrary to the provider’s name. Given these limitations, it’s hard to see how Internet.org could help 100,000 people in the country climb the economic ladder.

There’s a reason why Internet.org is often called ”poor internet for poor people.” Instead of upward mobility, the service is more likely doing its part to confine the world’s poorest and least educated people—many of whom have come to believe that Facebook is the internet—to its walled garden. As Naveen Patnaik, chief minister of the Indian state Odisha, said: ”If you dictate what the poor should get, you take away their rights to choose what they think is best for them.”