Insurance companies generally work like this: They take money from lots and lots of people, throw it into a giant pile and then invest that pile in relatively safe assets like corporate and government bonds.

Ideally, those investments produce enough income so that when bad, expensive things happen to the people that bought insurance policies, the insurance company can easily foot the bill.

US insurer MetLife has a simple answer. Interest rates wll remain low for a long, long while. The company has good reason to know. MetLife said low interest rates weighed on profits in its most recent quarterly results. John Hele had this to say (per SNL Financial):

Keep in mind that the 10-year Treasury note hasn’t consistently yielded around 4.5% since the heady days of the housing bubble. 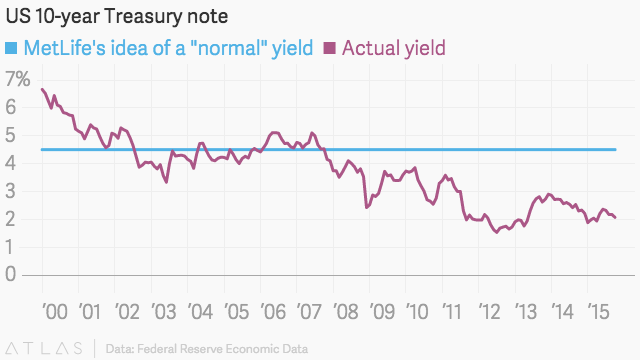 Eleven years, for God’s sake. While that sounds like a bit much, their extremely cautious approach makes a bit of sense in light of the current stat of the global economy. Hele again:

We talked to a lot of economists and academics on this and looked at the global economy, I think given this year compared to even a few years ago where there was much more optimism about the recovery of the world economies, we see a much slower growth for now and for the foreseeable future.

Also, Hele’s remarks highlight the fact that global economic conditions—a slowing China, fragile emerging markets and still-sluggish Europe—are putting broad downward pressure on interest rates. That downward pressure comes even as the US Federal Reserve preps the market for the possibility that it could raises its benchmark interest rate at its next meeting in December. But even as the Fed preps for its first hike in almost a decade, other central banks have been moving in the other direction:

All this is to say that, Fed hike or no Fed hike, interest rates may stay low for a good, long time.