A threat “to kill all muslims” at Virginia Tech University has raised fears that an attack directed against the campus Muslim community may be imminent.

In an email to the university’s student body, the university’s police unit wrote: ”On Monday [Nov. 2], the Virginia Tech police department received a report concerning graffiti that was left inside a bathroom stall in Price Hall.” The graffiti writer had left a note that read, ”I will be here 11/11/2015 to kill all Muslims.”

Virginia Tech has a tragic history with on-campus violence; in 2007, a student shot and killed 32 people at the campus before taking his own life. But school attacks—usually shootings—are a nationwide epidemic: Just last month, a gunman killed 10 and injured several others at an Oregon community college. And October alone saw gun-related violence in campuses in Tennessee, Arizona and Texas.

The Oregon shooting was the 59th gun-related incident at a school in the US this year. It was the 156th since 2013, according to US advocacy group Everytown for Gun Safety.

The specificity of the target at Virginia Tech adds a new dimension to this threat. Obaid Rehman, president of the Muslim Student Association at Virginia Tech, blamed rising Islamophobia in the US as a contributor to the potential for violence against Muslims.

“Unfortunately, this rhetoric has become acceptable in many ways that people talk about Islam,” he told the Washington Post. “Islamophobia is becoming normalized in many ways in our society. But there are many more good people than bad, as we can see from the university reaction to this event.”

Since 9/11, hate crimes against Muslims have skyrocketed in the United States, according to data from the FBI. The agency saw anti-Muslim offenses rise five-fold, compared to pre-9/11 years. 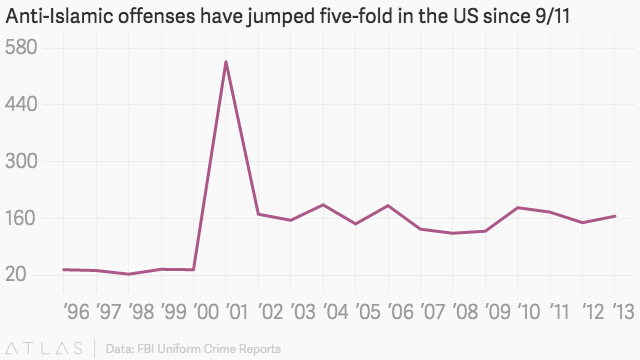 Public perception of Muslims is currently low. A 2014 poll by the Pew Research Centre found that Americans had the least warm feelings towards Muslims of any religious group in the country. Another poll in March found that 55% of Americans have a “somewhat unfavorable” or “very unfavorable” opinion of Islam.

At Virginia Tech, Rehman says the community has been very supportive since the Nov. 2 threat became public. But he was also keen to emphasize that anti-Islamic rhetoric across the country, which this year has also found vocalization within the Republican party’s campaign for president, may be creating conditions for even more threats of campus violence—and the tragedies that could follow.

“It’s unsettling that this kind of thing can take place here. It’s very disappointing that this rhetoric of hate is present,” he told the Post.