The Danube is a mighty river. It flows through Austria’s largest state and with it brings power: so much that the state’s governor says they no longer need to use fossil fuels to generate electricity.

The state of Lower Austria, which encircles Vienna, now gets nearly two-thirds of its electricity from hydropower, Erwin Pröll said at a news conference yesterday (Nov. 5). Of the remainder, the state sources a quarter from from wind and the rest from biomass and solar. No fossil fuels have to be burned to make the state self-sufficient in power.

Lower Austria is home to 1.6 million of the country’s 8 million people, and is leading the rest of the country in renewable production. That in itself is quite an achievement. As a whole, Austria produces around 70% of its electricity via renewables, the highest share in the EU. It’s blessed by a mountainous geography that makes hydropower—usually produced by damming rivers at altitude and then letting the water flow downhill—possible. 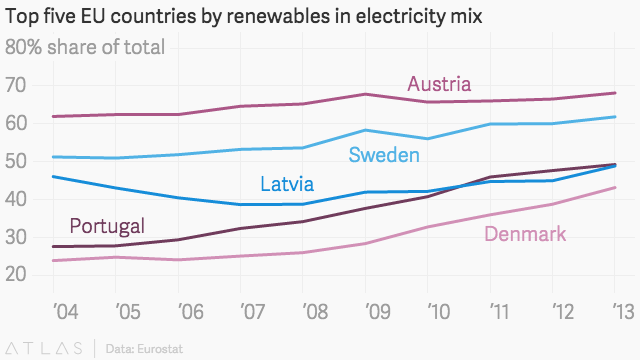 European countries that have achieved 100% renewable electricity nationwide—like Norway and Iceland—have done it by similarly harnessing natural resources like rivers and hot springs. Denmark’s increase, though, is down to huge investments in wind power.

In terms of total energy production, meanwhile, Austria is sourcing about a third from renewables, already close to hitting it’s 2020 target of 34%. Neighboring Germany, which has invested massively in new infrastructure like wind and solar, is meeting a quarter of the needs of it’s much larger population with clean energy sources.