Happy pay-gap day! Women in the UK won’t be laying down the tools of their trade today. But in comparison with male colleagues, they won’t be getting paid for their toil either. The pay gap between Brits of different genders means that women effectively earn 52 days’ less salary than their male counterparts.

Nov. 9 marks the day on which women symbolically stop getting paid according to the Fawcett Society, a campaign group. They say the gap between male and female full-time workers is 14.2%.

Calculations by the Office for National Statistics make it narrower than that, but still close to 10% (there are many different ways of calculating income). It’s a smaller gap than in the US, but still significant: 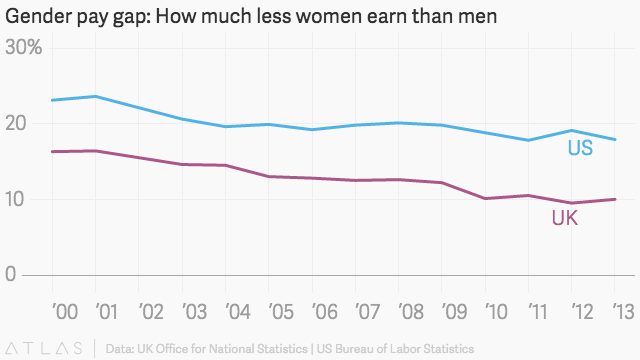 Discussion around the gender pay gap this year has ranged from sexism in Hollywood, to discussions of whether women are worse negotiators than men, and questions about whether the culture of non-transparency around salary is to blame.

As women in Britain slog away for the rest of the year—often balancing other work like childcare with their career—some will certainly be wondering when, if ever, the narrowing gap will finally be eradicated.