Two ships passing in the night? The world needs more of those, says the Organization for Economic Co-operation and Development.

The OECD—a post-World War II-era economic development group that stands in roughly for so-called “developed markets” around the world—just came out with its latest economic forecasts, expressing concerns about the slowdown in global trade. Although it expects economic growth to continue largely intact next year (3.3% GDP growth after this year’s 2.9%) and in 2017 (3.6% growth), it thinks more stuff should be criss-crossing the globe to fuel that growth.

Global trade, which was already growing slowly over the past few years, appears to have stagnated and even declined since late 2014, with the weakness centering increasingly on emerging markets, particularly China. This is deeply concerning as robust trade and global growth go hand in hand. In 2015 global trade growth is expected to grow by a disappointing 2%. Over the past five decades there have been only five other years in which trade growth has been 2% or less, all of which coincided with a marked downturn of global growth.

A presentation accompanying the forecast (pdf) was more pointed, saying that such depressed trade levels are usually associated with global recessions:

It doesn’t help matters that latest batch of disappointing trade figures for China, the supposed chief instigator of the slowdown, came in overnight. Imports were down 7% year-over-year, and imports fell nearly 19%. And though the economic data coming out of China might be troublesome, that doesn’t make it any less troubling. 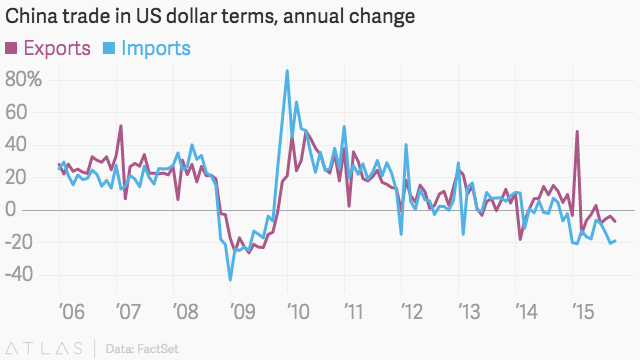