Mexico is losing billions of dollars to corruption that could instead be pumping the country’s slowing economy.

Corruption could be costing Mexico some $890 billion pesos a year ($53 billion), or 5% of the country’s GDP, according to calculations by the Mexican Institute for Competitiveness (IMCO in Spanish.) The think tank, which released a report dubbed “Corruption in Mexico: We Cheat and We Don’t Advance” on Nov. 9, said that amount would cover three times the budget of Mexico’s department of education and nearly eight times the spending by Mexico’s poverty-fighting agency.

Ary Naim, Mexico manager for the World Bank’s International Finance Corporation, puts the scale of corruption at 9% of GDP, based on estimates compiled in another report on the topic (link in Spanish,) his office told Quartz.

“It’s a massive thing,” Naim said (link in Spanish) during a summit organized by The Economist magazine on Nov. 5, according to Mexican newspaper El Financiero. “Mexico has not made any progress in this area in recent years.”

Mexico’s economic losses from corruption become even more significant in light of the country’s dimmer growth prospects. On Nov 9, the OECD lowered its Mexico GDP growth forecasts to 2.3% and 3.1% for 2015 and 2016 respectively, down from the 2.9% and 3.5%  (link in Spanish ) it had expected in June.

Mexico would not be immune to the weaker global economy even without corruption, but its prevalence is making the country less competitive.  About 60% of entrepreneurs consider corruption as part of Mexico’s business culture and it affects their daily operations, according to a survey quoted in IMCO’s report. Some 65% said they have lost out to competitors who paid bribes or used their influence to win business opportunities.

That is preventing Mexico from fully profiting from improvements such as increased investment in research and development, and growing international trade, according to IMCO. Mexico ranked 36th out of world’s top 43 economies according to IMCO’s competitiveness index. That’s below China, Brazil and South Africa.

“Corruption is not a problem exclusive to Mexico, but impunity is,” IMCO’s director Juan Pardinas wrote in the report 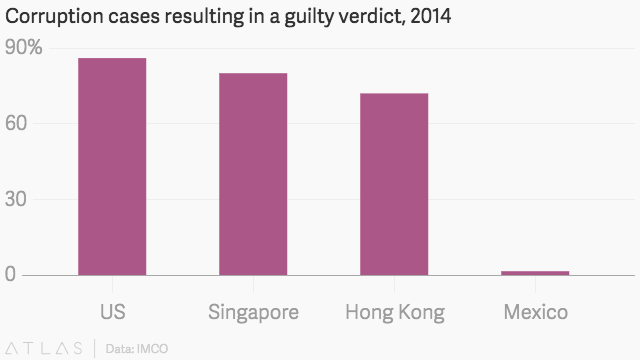