According to Donald Trump, China is America’s “number one abuser” in matters of international trade. “If you look at the way they take advantage, it’s through currency manipulation,” he said during last night’s Republican debate.

The leading GOP presidential contender had laid out the finer details of his outrage in a Nov. 9 Wall Street Journal article (paywall), writing:

“[The worst of its sins] is the wanton manipulation of China’s currency, robbing Americans of billions of dollars of capital and millions of jobs. Economists estimate that the yuan is undervalued anywhere from 15% to 40%. Through manipulation of the yuan, the Chinese government has been able to tip the trade balance in their direction by imposing a de facto tariff on all imported goods.”

On all these points, Trump is patently wrong. Just ask the IMF, which says the yuan is no longer undervalued.

Mind you, Trump would have been right—if he were fulminating thusly in, say, 2007. Throughout the late 1990s and much of the 2000s, the Chinese government did indeed prevent the yuan’s value from rising against the dollar, making its exports cheaper than they should have been, and imports, conversely, pricier. This chart shows the nominal effective exchange rate, which weights the value of a currency against those of its trading partners. When each currency is in positive territory, it means a country’s exports are likely losing out to competitors. 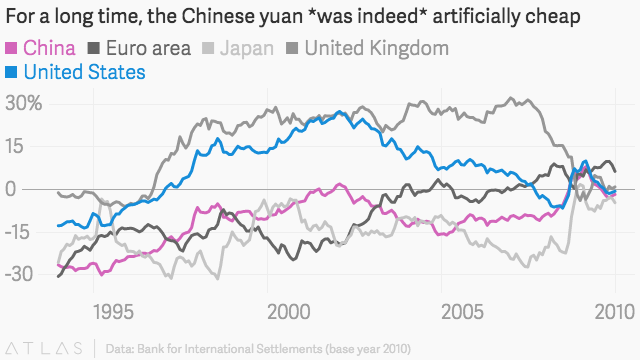 As you can see, China’s goods were for many years underpriced. But that’s changed now, thanks in part to the Chinese government allowing the yuan to strengthen against the dollar (against which it manages a soft peg). It’s also due to rampant quantitative easing by the US Federal Reserve, the Bank of Japan, and the European Central Bank, which has cheapened their own currencies. 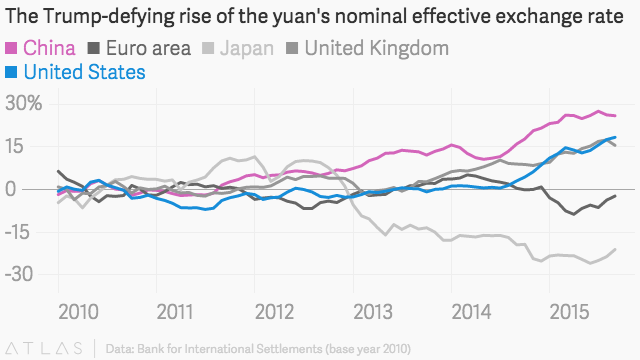 On top of all that is what happened on Aug. 11, 2015. When the People’s Bank of China announced that it would start letting the market have a bigger role in dictating the yuan’s value, its currency plummeted. Since then, capital has been pouring out of China.

That should drive the yuan’s value down. The fact that it’s stayed roughly stable suggests the PBoC is propping up the yuan’s value—the exact opposite of what Trump argues. Many economists believe that if the central bank let it trade freely, the yuan would drop much further—meaning that Chinese exports are now artificially expensive. 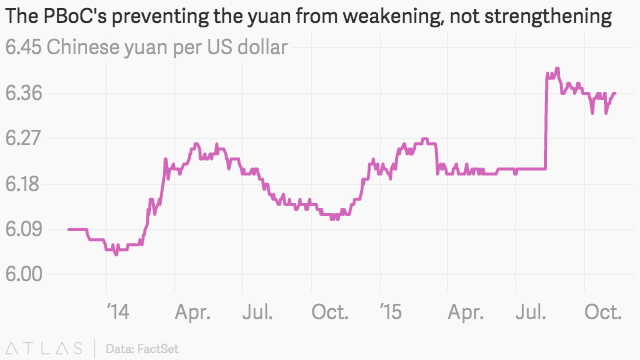 It’s unclear whether Trump genuinely believes the cartoonishly good-versus-evil economic theory. There are signs he does. Fielding a debate question on the Trans-Pacific Partnership, he called it a “deal designed for China to come in and take advantage.” China, however, isn’t part of the TPP.

Neither are Trump’s ideas all that original. Borrowing pretty much verbatim from Mitt Romney, the 2012 GOP presidential candidate, the reality television celebrity and real estate tycoon declared that on the first day of his administration, he will designate China a “currency manipulator,” triggering a set of trade sanctions against China.

Trump certainly could block Chinese goods from crossing US borders. Store shelves would empty, leaving American households and companies without many of the goods they need—things for which the US has long since shed the manufacturing capacity to make—which could stoke inflation. If China retaliated, the many US firms that operate there would likely suffer. And if a trade war with China ensued—putting hundreds of billions of US exports to China at risk—it’s unlikely Americans would find that their new president had done much at all to protect them.