At least one item of clothing on you right now is probably made of cotton. The world’s most commonly used natural fiber, it’s in just about every closet. And before it gets there, it can wreak havoc on the environment and the people who farm it: Cotton requires huge amounts of water to grow, it’s often treated with toxic chemical pesticides, and child labor in cotton farming remains a huge problem in parts of the world.

But that’s changing, according to the latest report (pdf) from the Better Cotton Initiative, an alliance of organizations, manufacturers, retailers, and clothing brands. Conventional cotton is slowly—very slowly, but steadily at least—giving ground to ”better cotton.”

Vague as it sounds, “better cotton” meets environmental, social, and economic standards (pdf) set by the BCI. Since major clothing producers such as Adidas, Nike, H&M, Zara, Levi’s, and others are members of the BCI, the more better cotton is produced, the less likely your usual jeans, t-shirts, and other everyday items are to have destructive origins.

The number of cotton farmers worldwide participating in the BCI’s program for ethical growing and sourcing jumped 79% from 2013 to 2014, bringing the total to 1.2 million. The cotton they farmed now makes up 7.6% of global production. 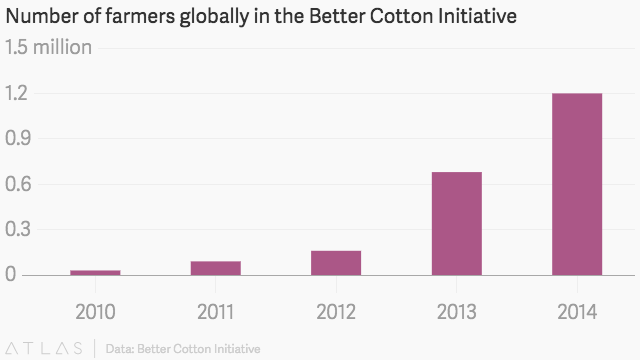 The BCI works with farmers to improve their practices, decreasing their use of water and pesticides, for instance. In China, the world’s largest cotton producer, the report claims that BCI farmers on small and medium-sized farms use 16% less pesticide and 16% less water than comparable farms not using BCI practices.

It also strives to ensure employees on its member farms are treated under the standard of “decent work” developed by the International Labour Organization, and promises “freedom, equity, security, and human dignity.”

This year, it began collaborating with local organizations to eliminate child labor as well; in India, the world’s second-largest cotton producer, the BCI said that 29% of its producers there reported engaging in partnerships that promoted access to schools.

The BCI is still fairly young—the report marks just its fifth cotton harvest—but several member brands are already incorporating increasing amounts of BCI cotton into their supply chains. About 6% of the cotton Levi’s uses today is better cotton, and it intends to raise that number to 75% by 2020. H&M currently uses about 7.5% better cotton, but wants to use only cotton from “more sustainable” sources by 2020, which would largely mean better cotton and organic cotton. 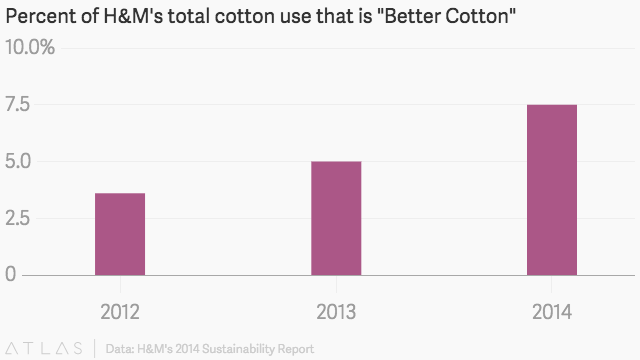 To be sure, there’s a long way to go before mass fashion is anywhere near sustainable. The sheer amount of cotton that brands such as H&M use, responsibly farmed or not, is a problem in itself, and workers continue facing unsafe conditions in countries such as Bangladesh. But slow progress is still progress, and every pair of jeans counts.