Bad news for Macy’s could be great news for customers—the company’s revenues have plunged, which means year-end sales are likely to be fantastic.

The retailer reported earnings this morning (Nov. 11), and they stank. Profits were actually in line with expectations, but revenue, at $5.9 billion, was less than analysts were hoping for. Coming after Citigroup raised a red flag about the company’s performance on Monday (Nov. 9), that’s especially bad news. The stock was down about 13% two hours into the trading day. 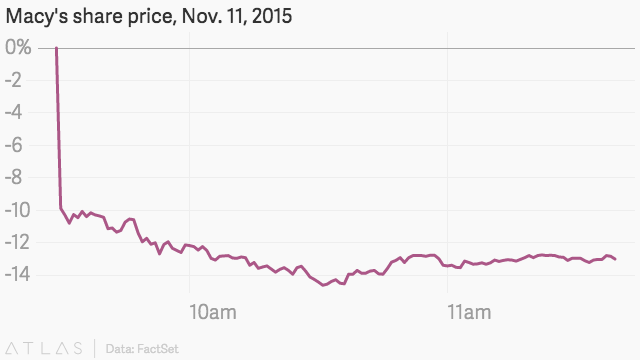 We are disappointed that the pace of sales did not improve in the third quarter, as we had expected. Spending by domestic customers remained tepid, especially in key apparel and accessory categories. Simultaneously, the slowdown in buying by international visitors continued to significantly impact Macy’s and Bloomingdale’s stores in tourist centers, which are some of our company’s largest-volume and most profitable locations.

To add insult to injury, Macy’s cut year-end guidance across the board, Even though it expects to make $60 million selling real estate in Seattle, Washington and $250 million on property in downtown Brooklyn, New York, earnings, revenue, and same-store sales projections are all lower than expected over the summer.