About a month ago, American Apparel filed for bankruptcy. Now, the once popular purveyor of basic t-shirts and leggings is hanging on by a thread, though that apparently hasn’t stopped it from dreaming big.

CEO Paula Schneider told the Financial Times (paywall) on Nov. 11 that American Apparel could double its hundred or so international stores in the coming years. Currently it has just over 200 stores total, and has been closing US locations that aren’t performing well.

At the moment, the brand is struggling just to handle its current operations. The bankruptcy has choked its cash flow, and it said it was only able to buy around 10% of the fall collection it had planned. It’s also contending with a revolt in its Los Angeles workforce.

On Nov. 10, American Apparel announced it couldn’t meet the deadline to file its quarterly earnings for the three-month period ended Sept. 30. Initial results, however, showed sales still falling, down 19.1% from the same period the previous year. 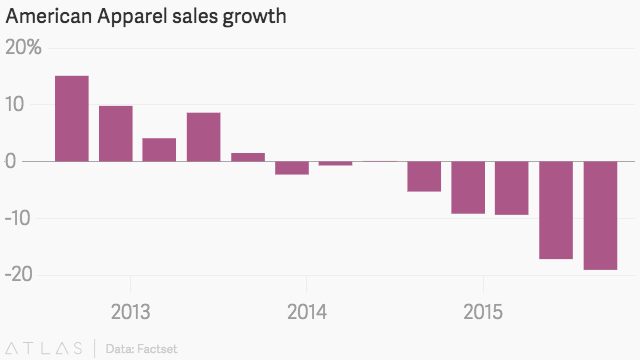 Despite being North America’s largest apparel company, the brand has seen its US customers steadily slipping away. But according to Schneider, that isn’t the case overseas.

She told the Financial Times that the brand is ”absolutely on fire” in South Korea, and that there’s huge demand for it in the Middle East. Its basics are evidently comfy to wear under traditional clothing, which tend to be a lot more conservative than gold lamé leotards and some of the brand’s other offerings—to say nothing of its advertising.