Needless to say, American women have come a long way since the 1940s. More graduate from college, work outside the home, and marry later.

But all that progress is not evident in one important area. A greater share of young women in the US are living with their parents or other relatives today than at any time since Word War II, according to a new analysis by the Pew Research Center. Last year, 36.4% of women aged 18-34 lived with family, compared with 36.2% in 1940: 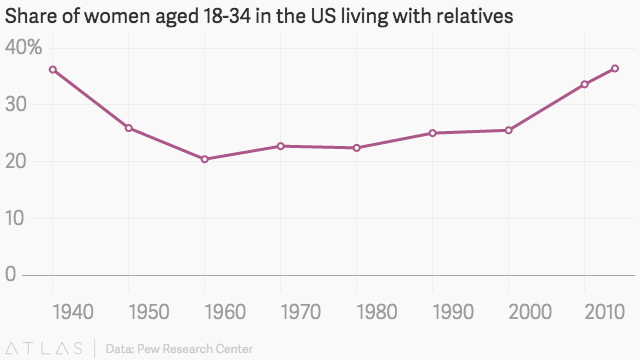 While it may feel back to the future for many women, they are still more independent than many men, 42.8% of whom shacked up with parents or relatives last year. But the men at least have seen their share decline since the war (it was 47.5% in 1940).

This is not a solely an American phenomenon. The share of young women living at home well into their twenties and thirties has been rising elsewhere, too. Looking at women 25-34 years old, the share still living at home with their parents has risen over the past 10 years in a number of Western countries. There is a very large difference in degree—more than three times the share of young women in Italy, Poland, and Spain have traditionally lived with their parents than in Germany, the UK, and the US: 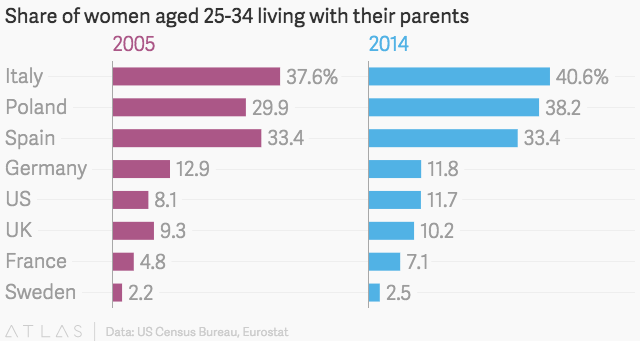 Generally speaking, the rise in young women living at home coincides with the fact that they are marrying later, and thus fending for themselves in pricy property markets. In the US, half the share of women younger than 34 get married today than they did in 1940; the median age of first marriage for American women has risen from 21.5 in 1940 to around 27 today. The global financial crisis was also particularly hard on young people, who are still dealing with the fallout—persistently high unemployment, depressingly low wages, and the like.

And then, of course, there are the home-cooked meals and free laundry service that comes with living at home.