There are two levers a brand can pull to boost profit: Increase revenue, or decrease expenses. For Burberry, increasing revenue hasn’t been going well, so for the past few months, it’s been leaning more heavily on option two.

Since July, Burberry has cut about £20 million ($30.4 million) in costs as it continues to struggle with a slowdown among Chinese customers, on whom it has relied for a sizable portion of its sales.

The focus on expenses has helped: While Burberry’s revenue for the six months ended in September stayed almost perfectly flat over the same period last year—the chart below illustrates the magnitude of the slowdown in sales growth—profit in the six-month period rose 14% to £119.5 million ($182 million). 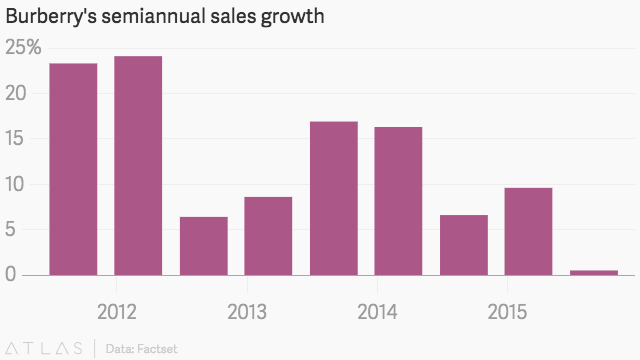 The “tight management of costs,” as Burberry termed it in its latest financial disclosure (pdf), is part of a broader effort to improve efficiency and productivity, and it involves all sorts of measures, both large and small.

For instance, rather than travel off-site for meetings, employees are doing them digitally, Carol Fairweather, Burberry’s CFO, said on a media call today (Nov. 12). Other types of travel and discretionary spending are being reigned in as well.

“It’s very much being creative about how we best spend our money,” Fairweather said.

In Hong Kong, stores remain profitable, but expensive rents have been chipping away at the company’s high margins. It’s the largest cost in a major market for the label, so Burberry, like other luxury labels, has been renegotiating its lease deals with landlords—and indeed, retail rents in posh neighborhoods are finally dropping. Burberry’s Hong Kong flagship is also going to shrink a bit, from two floors to just one. “It remains the flagship store,” Fairweather said. “It’s still large. It looks beautiful.”

Burberry’s recent decision to consolidate its three labels—Brit, London, and Prorsum—into one will save a bit of cash as well, as it reduces the internal complexity of producing three separate lines.

A separate kind of cost-cutting aimed at employee pay reaches all the way to the top, as Burberry made clear a few weeks back when it announced it would slash CEO Christopher Bailey’s earnings. In total, Burberry says it cut about £30 million ($45.6 million) in performance-related pay, including bonuses, in the first half of the fiscal year.

Chopping expenses is, of course, no solution for falling sales, which have hit a lot of the brand’s items—its heritage scarves and trenchcoats remaining the exception. But it’s certainly a sensible thing to do, even for a luxury label.