So why are rich governments still paying hundreds of billions every year to prop up the production of everything from coal to crude? The question was posed again this week in a report (pdf) from the UK’s Overseas Development Institute, a think tank, and Oil Change International, an NGO that advocates for a reduction in the use of fossil fuels.

The total figure they came up with was an eye-watering $452 billion every year. Here’s how the totals break down by country: 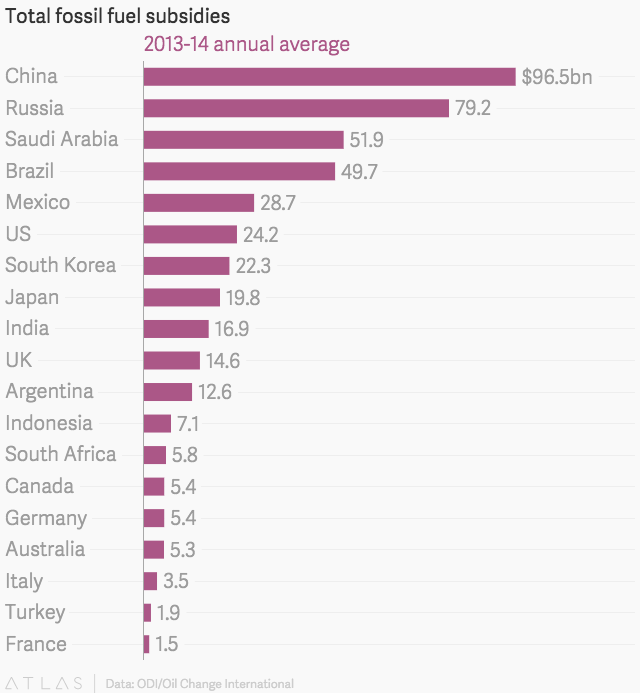 China and Saudi Arabia’s financing was mostly channeled though state oil giants like Saudi Aramco and Petrochina. When it came to straightforward subsidy, Russia was the most generous supporter of its fossil fuel producers, channeling over $22 billion to them in the year 2013-4. The US came next with over $20 billion. The UK, where North Sea oil has been faltering for years, came in third, with $9 billion devoted to fossil fuel extractors.

The report also notes that the G20 nations aren’t just ploughing cash into their own coalfields and oil wells—money is also flowing into producers in places like Africa through institutions like the African Development Bank, which spent $254 million of fossil-fuel projects in 2013-14.

The report’s authors said that in supporting fossil fuels to this extent, the G20 countries were creating “a ‘lose-lose’ scenario”: pouring money into carbon-intensive assets that may be impossible to exploit while limiting global temperature increases to no more than 2ºC; and diverting investment from low-carbon alternatives.

The counterargument to this is that while most countries are also supporting the building of renewable technologies, it’ll be a long time before they can meet growing energy needs. Some fossil fuels—and especially less-polluting alternatives like gas—will therefore need to remain in the mix for many years to come. In transport, meanwhile, though electric cars are becoming more popular they’re nowhere near replacing petrol and diesel engines.

But the potential clash between fossil fuels and clean tech was still stark in the development bank investments. Together, the institutions provided $8.8 billion in annual financing for fossil fuel production, averaged over 2013 and 2014, “canceling out the $8.8 billion that these institutions financed in ‘clean’ energy over the same time period,” the report said.