Although Manchester United is currently lingering in fourth place in the Premier League, the club might be about to seal a title that no other soccer club has attained. According to the BBC, United’s earnings were up over 39% for the quarter over last year, and the club announced that it expects revenue for the year to be between £500 and £510 million ($760-$775 million). No other soccer club has had revenue greater than $760 million in a single year before.

Manchester United said that its revenue was boosted partially by a jump in jersey sales, as well as the fact that the club is back in the Champions League—one of the most lucrative competitions in sport. The team has brought in some big stars in recent seasons, including Bastian Schweinsteiger, Memphis Depay and Juan Mata—and to a lesser extent, Ángel Di María and Radamel Falcao—whose names fans across Manchester, and around the world, might want plastered across the backs of their replica jerseys. The club also signed a deal with Adidas in 2014, in which the German athletic company will pay in excess of $1 billion over 10 years to make Man U’s jerseys.

United are currently only two points behind league leaders and arch-rivals Manchester City, so there’s a strong chance that the Red Devils will also be able to keep the Champions League money rolling next season too. 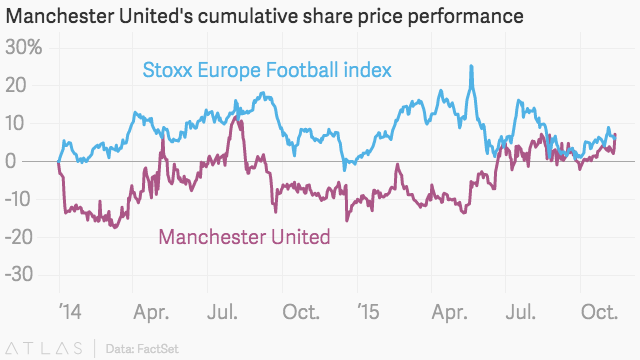 Since the departure of managerial legend and pizza-throwing target Alex Ferguson in 2013, United has been through two managers, and have not hit the heights that became expected of the team during Ferguson’s tenure. The club listed on the New York Stock Exchange in 2012, and when comparing the team’s share price to an index of European soccer clubs (mainly listed in their local markets) over the past two years, United initially floundered, but has recently started to find its form—much like the club’s on-field performances.

But it’s possible that, as in the Premier League, Manchester United might get pipped to the post. Real Madrid posted over €660 million ($710 million, or £467 million) in revenue in 2014, growing about 9% over the previous year. With the club still in contention in the Champions League and Spanish Primera league championship, Los Blancos may post an even larger figure than United’s, if it keeps up its current growth rate.