“We’re not economists, we’re merchants,” he said on the company’s earnings call. “And we concur with you that if you get to a higher altitude and you look at the scorecard, there are a number of economic indicators that look real positive for the US and the consumer and spending, yet all we can tell you is in our business, we saw a slowdown.”

They were up 1.7% in October from the same time last year, and only grew 0.5% if you cut out auto sales. 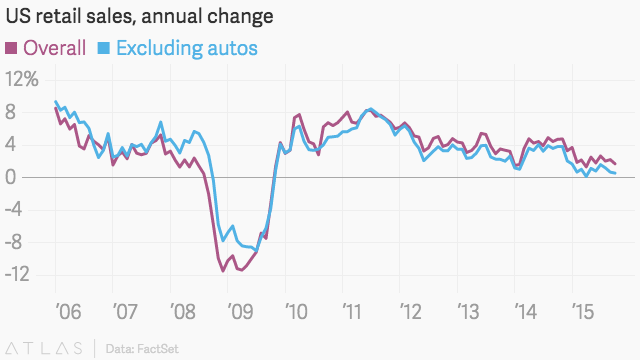 A portion of that (in a pretty volatile data point) is less money spent at the gas station, as fuel prices are still super-low. But that doesn’t explain everything, as gas station sales declined a little bit less. Healthcare, building materials, and non-store retailers (e-commerce and the like) excluded, everything else is slowing down.

“This is clearly a mixed report. Headline soft, revisions better.” wrote Bank of Montreal’s economics team in a note to clients. ”It doesn’t help retailers get into festive mood, however.”