The terror attacks in Paris, which resulted in 127 deaths and an estimated 200 injuries, have already been linked to the French military intervention in Syria that began in September, and to Islamic extremism. The attacks, which have so far been attributed to the ISIL terror group, are terrible news for Europe’s refugees.

The recent violence will help justify the policies of those who most fear the influx of refugees. Today (Nov. 14), Marine Le Pen, the leader of France’s rightwing National Front party, made a speech and tweeted a series of extracts from it, calling for the closure of radical mosques and the strengthening of borders. “The enemies of France are those places that maintain links with Islamism,” she wrote:

Right-leaning parties across Europe have long linked the narratives of an increase in refugee numbers with that of terrorism—despite the fact that many refugees, including those from Syria, are fleeing persecution by the same forces that likely perpetrated the attacks in Paris.

This stirring-up of anti-immigrant, and anti-Muslim, feeling is no accident. It is, in fact, one of the expressed aims of the groups that organize attacks on Western targets. According to information highlighted by Wikileaks, it’s part of a plan to make the world more polarized:

Poland said today (Nov. 14), in the wake of the Paris attacks, that it will now refuse to take the small number of resettled asylum-seekers it had promised to house under a contentious EU “quota” system.

European nations have offered a mixed, and constantly changing, response to the refugee crisis. Germany initially said it planned to receive up to 800,000 people across its open borders, but has since backtracked. Other countries, especially eastern nations like Hungary and Slovakia, have put up a strong resistance to pressure to accept refugees. Borders have been closed, and fences erected.

The Paris attacks take place in different world than the one that existed 10 months ago, when another terrorist incident shook Paris. In 2015, there’s been a huge spike in refugees, especially from war-torn Syria attempting to resettle in Europe: 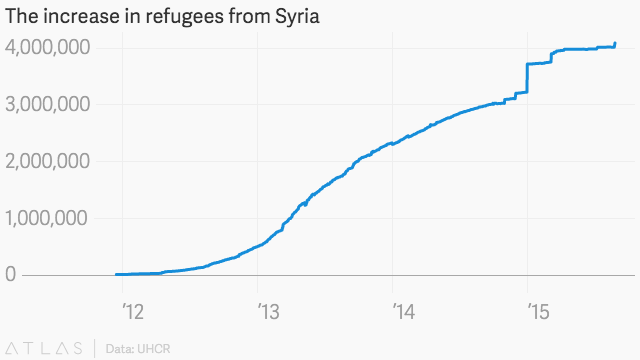 France may not be at the very forefront of the refugee crisis like Greece or Italy. But Europe’s open-border policy means it’s easy for people to travel through and remain in its territory. This has already produced points of extreme tension, like the “Jungle” settlement near Calais, which goes unrecognized as a refugee camp despite housing 6,000 people—many of whom are trying to get the UK, which doesn’t subscribe to the EU’s open-border rules.

A fire broke out in the camp last night. It was unrelated to the violence in Paris, but early reports linked the two—probably because, now, the likelihood of reprisals, tensions, and violence seems even greater than before.