Later this month, representatives from some of the world’s biggest polluting countries will gather in Paris to negotiate a collective agreement to limit global warming to fewer than two degrees celsius below pre-industrial levels.

It’s a massive task, especially since global average temperatures are likely to have risen by one degree from those levels—halfway to the crucial point of no return—by the end of this year.

But as individual countries commit to cuts, the runaway emissions of industries that operate across borders is becoming more apparent. In 1990, the world’s entire maritime industry emitted less than half the carbon of Canada. Aviation emitted even less. But by 2030, both these industries will outstrip Canada and other large economies by millions of tons of carbon every year. 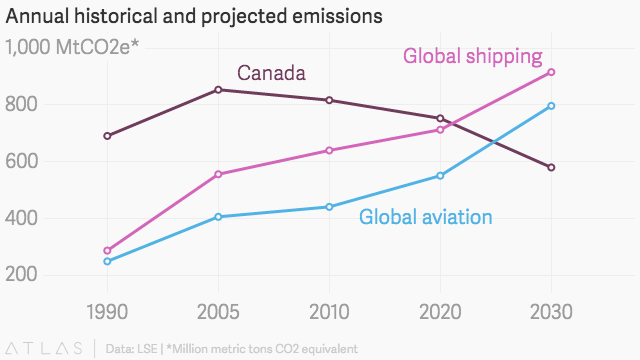 The forecasts by the London School of Economics (pdf) include several scenarios for countries’ emissions in 2020 and 2030. We’ve compared them with Canada’s national emissions because the country’s commitment to cut its pollution by 30% below 2005 levels by 2030 isn’t subject to as many variables as other countries’ (like India, which bases its commitment on how fast its economy grows).

Making emissions commitments at the country level is hard enough. But global shipping and aviation feature a complex web of public and private companies, with huge variations in emissions.

Recent data (pdf) on aviation from the International Council on Clean Transportation—the group that revealed Volkswagen’s emissions cheating—show that the average British Airways plane emits 1,100 kilograms of CO2 per passenger for a round trip between London and New York, but Norwegian Airlines, the most efficient airline studied, emits just 720 kilograms per person for the longer round trip between Oslo and New York.

Industry-specific pledges to cut carbon emissions are in the works. But as these globe-trotting industries’ emissions start to outstrip those of entire nations, they will find themselves increasingly in the spotlight.