Home Depot reported earnings this morning, and they were actually pretty good. The company posted $1.7 billion in profits on $21.9 billion in revenue, and both figures beat expectations. Unlike some of its department store counterparts, the hardware chain seems to have kept its year-end guidance intact. The company’s shares fell about 3% in early trading.

When the Census Bureau released its latest estimate of retail sales last week, “building supplies” was one of the few areas to show increased year-over-year growth. 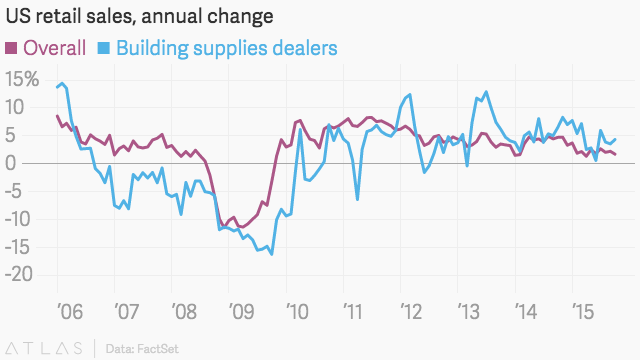 The United States is in the midst of a housing boom. On an earnings call, Home Depot executives noted that purchases above $900 made up 20% of the company’s sales in the quarter and had increased 7.8% from a year earlier, which was faster than purchases below $50, which make the same portion and increased only 3.6%.

Just because retailers like Home Depot have had a good quarter doesn’t mean that there aren’t serious problems facing the retail sector—but it’s a welcome sign of life in the US economy.