Bemoaning the Metropolitan Transit Authority (MTA) is a New Yorker’s favorite pastime. It’s not unjustified: Recent reports from the public transit service itself show that the subway is regularly overcrowded and delayed, making city dwellers increasingly annoyed at riding the train.

Since 2010, the MTA has offered a program that tries to alleviate at least some of the anxiety and distress of the 5.6 million people who ride the subway each weekday. The agency allows riders to request online “delay verification“ forms—essentially, late-to-work slips for people to prove to their bosses or teachers that they really were stuck on the subway, and not just slacking off at home. And more than 100,000 riders a year are making use of it. 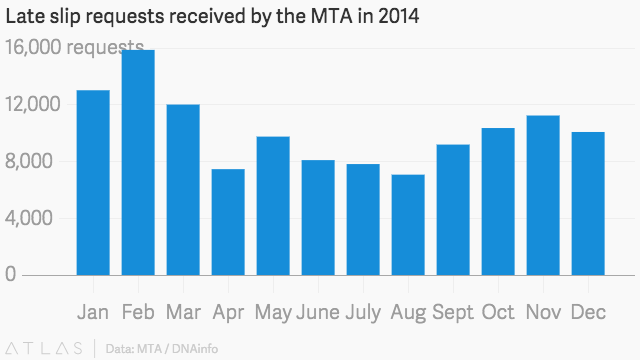 Late-to-work slips in 2014 were most frequently requested by riders on the 4, 5, 6, A, and 2 (which makes sense, given that many of these lines are among New York’s busiest and arrived late roughly 30% of the time in 2014). The delay-verification requests came in most heavily for days where power outages or weather-related events wiped out service at multiple stations across the city.

The MTA’s late-slip program has technically existed for decades, but the group’s decision to put it online in 2010 resulted in an overwhelming increase in request volume. No other major US transit system offers a similar program—though many, including ones in Boston and Washington, do allow riders to ask for delay confirmations via traditional customer-service channels.

The London Underground gives refunds to passengers if delays “for reasons within our control” last for more than 15 minutes; and Tokyo’s subway system—which prides itself on the utmost punctuality—issues genuine messages of apology on ticket slips when trains are late.

Back in New York: Straphangers can use the MTA’s online form to make late-slip requests within 90 days of their delay. Still, they should know that the MTA’s confirmations may not be as specific as they might hope.