The frenzied investing in China’s tech sector might be a bubble, but that bubble keeps getting bigger. From $1.3 billion in the first half of 2013, investments in Chinese internet companies rose more than five times in this year’s first half, to $6.6 billion, according to a new report by PricewaterhouseCoopers (pdf, p.27). 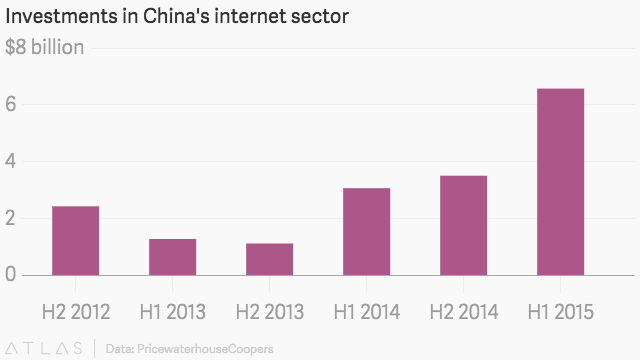 PricewaterhouseCoopers defines the Internet sector as e-commerce, online education, social media, internet marketing, internet services, internet finance, and online entertainment. Of those categories, e-commerce startups received the most funding, raising a total of $3.4 billion in first half of the year.

Increasingly, early-stage deals constitute more of the total value of China’s internet funding rounds. During the first and second quarters of 2015, early-stage funding rounds made up 78% and 74% of total funding, respectively, for internet companies. This indicates that investors still have plenty of appetite for risky bets on unproven companies.

China has seen its fair share of monster deals this year for companies with unproven business models. Ele.me, a food-delivery startup, raised a reported $630 million last August, after raising over $350 million in January. Didi Kuaidi, China’s competitor to Uber, continues to raise billions of dollars at a time—president Jean Liu has said that burning cash is necessary to ensure the company’s long-term survival.

Despite the impressive investments and big bets, anecdotal evidence indicates a cooling off period is imminent. Rival delivery and group buying companies Meituan and Dianping merged in October in order to curb vicious price wars, and a steady stream of on-demand service startups (car washes on demand, massages on demand) have shut their doors in recent months.