If you live in a one of the world’s more developed countries, chances are your access to quality health care has gotten better within the past ten years.

A report released this month from the Organization for Economic Cooperation and Development, a group of mostly wealthy nations, studied health indicators and expenses across its 34 member countries to compare the quality of health care in each.

But when it comes to spending, the US’s massive health care expenses are not reaping returns.

According to the study, the United States spends more money per capita than any other OECD country on health care—about $8,713 per person, more than twice the OECD average of $3,453. 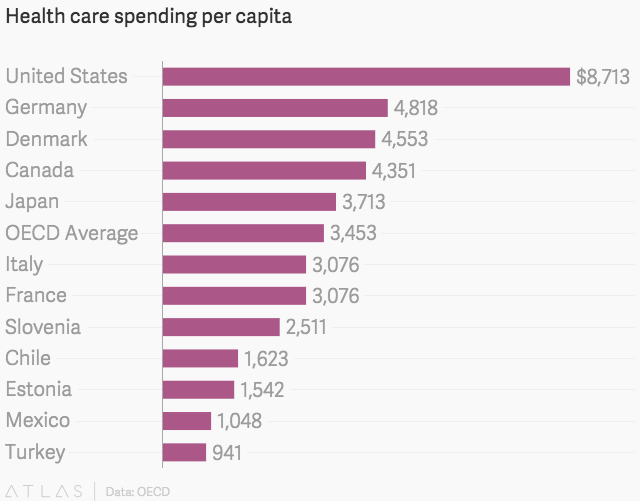 Yet Americans face an average life expectancy of 78.3 years, below the OECD average of 80.5, and just on par with Chile. 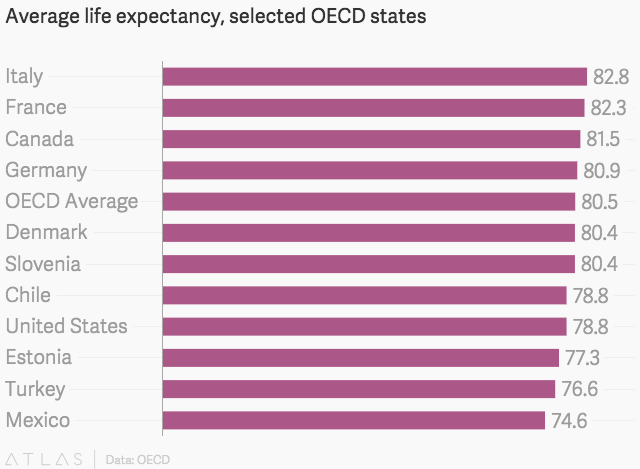 Here’s another way to look at it, courtesy of the OECD report:

Norway, Greece, Japan, Slovenia, and many other countries spend less money on health care, but have citizens that live just as long as Americans, or even longer.

This extra spending is not going to top-quality care, and sometimes not to care at all—the US wastes about $750 billion a year patching up the system’s inefficiencies, including poor administration, unnecessary services, and fraud.

The report did show a slight decline in the number of uninsured US citizens. The percentage of uninsured Americans dropped from 15% to 11% between 2013 and 2015, the study said, because of the implementation of the Affordable Care Act.