You know who hates ISIL, which claims to represent all Muslims? Countries with some of the world’s largest Muslim populations, according to a recent poll by Pew Research Center.

Since the deadly attacks in Paris on Friday, which killed 129 people and injured hundreds more, Muslims across the world have expressed solidarity with the victims, as well as condemning ISIL for committing yet another atrocity. And while some political commentators are calling for the Muslim community to condemn the so-called Islamic State, the poll shows that it is in fact nations with significant Muslim populations overwhelmingly expressed unfavorable views of ISIS. 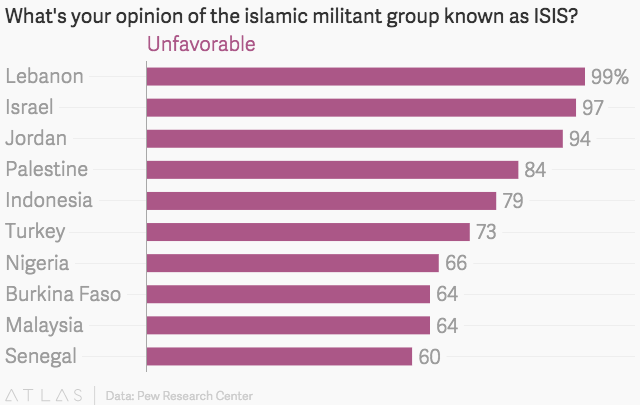 Lebanon hates ISIL the most, with 99% of respondents expressing negative views. Israelis (97%) and Jordanians (94%) followed closely behind in second and third place, respectively. No country surveyed in Pew’s poll showed no more than 15% of the population had favorable opinions toward the Islamic State.

But researchers note Pakistan was an exception, as a majority offered no definite opinion of ISIL.

When Pew surveyed the view of ISIL by religion, ethnicity, and region, it found 91% of Israeli Arabs and 92% of participants in the Gaza Strip strongly opposed ISIS; 79% in the West Bank did so, too.

It’s not particularly surprising those countries bordering Syria and Iraq—Jordan, Israel, and Lebanon—are least inclined to ISIL’s goal to build a “caliphate” across the region. Lebanon was also the site of deadly attacks last week masterminded by ISIL last week, the worst terrorist incident since the end of Lebanon’s civil war in 1990.

In fact, the vast majority of ISIL’s victims have been Muslim. The extremist group kills Muslims on a daily basis for not following its warped interpretation of Islam. A UN report (pdf) released last year details the gruesome ways in which ISIL has killed fellow Muslims, including beheadings, crucifixion, and stoning.