Strike while the iron’s hot.

Students at schools across the country skipped class today (Nov. 18) to demand institutional change from their universities. The movement, referred to as #studentblackout on social media, was organized by student activist group Black Liberation Collective and comes on the heels of a wave of student movements to show support for students at the University of Missouri last week.

The events at the University of Missouri that caused the school’s president, Tim Wolfe, to resign on Nov. 9 drew media attention to racism on university campuses and spurred student activists across the country to speak up regarding their own schools’ issues with inequality. On Nov. 11, students at Claremont McKenna College staged a successful protest to make demands that included the resignation of a dean who they claimed showed disregard for marginalized students.

Now, students from at least 32 schools have issued their own formal demands.

Thedemands.org has gathered the lists of demands from students at 27 schools in the US, and one in Canada. Here are the issues that showed up on these lists most often. 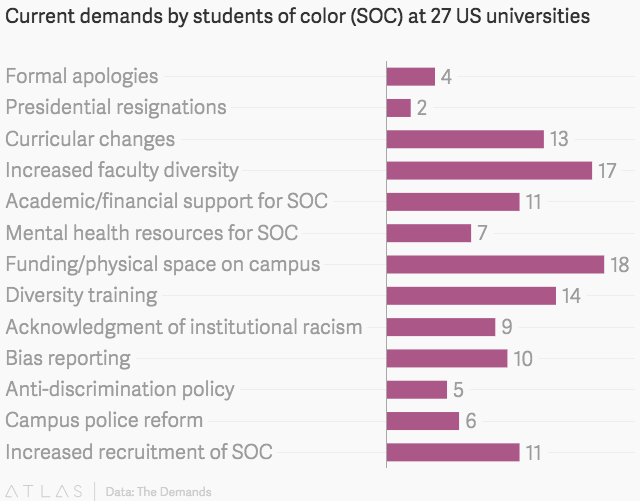