The tiny share of minority groups that work in science in the US has always been a problem. If only these people were brought into the field in greater numbers, they would have an equal chance to shine.

That doesn’t seem to be the case, as revealed by data acquired through a Freedom of Information Act request: 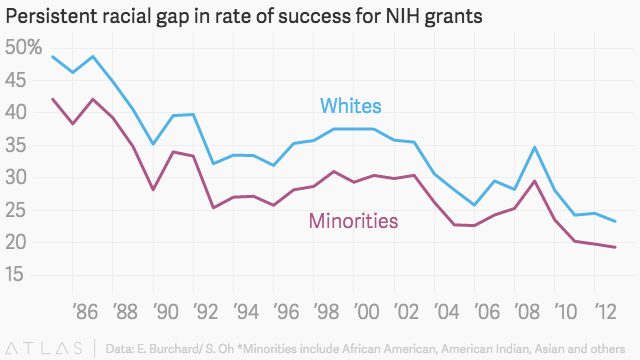 Esteban Burchard and Sam Oh, researchers at the University of California, San Francisco, who made the request, found that minority groups’ rate of success in funding applications to the US National Institutes of Health (NIH) was consistently 10% to 25% below the rate achieved by their white peers. This is emblematic of a broader problem of diversity in science.

“It’s not surprising, not new, and doesn’t answer questions of how we can intervene to give every scientist the opportunity to contribute,” Raynard Kington, former deputy director of the NIH, told Nature.

Funding grants are judged primarily on the ideas presented, so it could be that researchers with more experience and better training—mostly still white men—are coming up with better proposals for grants. But a 2011 study that controlled for factors such as publication record and training found that black applicants were still only two-thirds as likely to win grants as white counterparts.

A more straightforward explanation is that, although the strength of ideas should take precedence, funding decisions are often influenced by “in-group bias,” or the tendency to favor people who have the same background as those judging the grant application.

Affirmative action for scientific grants would attract controversy, so the NIH has instead promised to invest $500 million to programs that will help to attract, mentor, and retain minority researchers in key scientific fields. In 2014, it appointed its first chief officer for scientific-workforce diversity.