The hockey fight is not dead. Not even close.

A Nov. 14 punch-up between the Winnipeg Jets and the Nashville Predators landed every single player on the ice in the penalty box.

But in a sport renowned for its violence, these kinds of spectacles are increasingly rare. On-ice fights are in steady decline.

The fight rate for the current season is about 0.30 fights per game, according to the hockey violence compendium DropYourGloves.com. In the 1987-88 season—the most violent year of ice hockey’s most violent decade—it was 1.31. 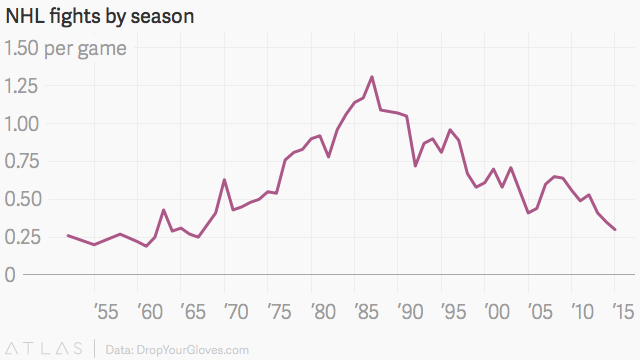 Quartz talked to Duane Rockerbie, an economics professor at the University of Lethbridge in Alberta, Canada, who studies the economics of professional sports. In a series of papers and book chapters, Rockerbie has analyzed the economic factors contributing to the hockey fight’s decline. He spoke to Quartz about his conclusions.

The salary cap is killing the enforcer.

Fighting is condoned in hockey in a way no other sport is. In the NBA, joining a fight on the basketball court is punishable by an automatic one-game suspension. Major League Baseball umpires liberally eject players involved in brawls. NFL players can be fined just for approaching an on-field scuffle.

In the NHL, fighting is fair game as long as players stick to the rules: no gloves, no kicking, no more than two combatants at a time, and no yanking the other guy’s jersey over his head. Five minutes in the penalty box and a player is back on the ice.

It’s also the only sport to pack its rosters with players whose greatest asset is their ability to fight. The enforcer is a legendary figure in ice hockey: scrappy, pugnacious, and typically less skilled as a skater or puck handler than the teammates they protect.

For most of NHL history, it was possible for clubs to keep great fighters on the team even if they didn’t offer much else in the way of skill. But that changed with the salary cap introduced after the 2004-05 lockout.

Teams now have less money to spend on their players, and it doesn’t make financial sense to keep a guy who’s great at fighting but not much else, Rockerbie said.

“There’s just not a lot of room to put those players on your team. The economics of the game have reduced the incidence of fighting,” he said.

It used to be that people who enjoyed watching adults punch one another had two entertainment options: boxing and ice hockey. Today’s bloodthirsty fan has a multitude of violent sports at his or her disposal—mixed martial arts, professional wrestling—that guarantee more punches per minute than ice hockey.

Fans like fights (and for reasons he can’t account for, Rockerbie’s research shows that American fans prefer hockey violence more than Canadian ones do). But they like winning more. As noted above, enforcers aren’t the most efficient use of resources. If teams aren’t getting the most talent for their buck, they aren’t going to be as competitive, and fans aren’t going to turn up.

So fighting is no longer associated with higher attendance and team performance. But hitting—the full-body-check, slam-into-the-boards kind of hit—still is.

“Hits are part of the game. It’s a fast game. Playing that kind of style can make you a better team,” Rockerbie said. “The type of fast, intense play where that happens is attractive to fans.”

Fights are still safer (and cheaper) than the alternative.

Purists may bemoan the loss of the good old violent days, but Rockerbie believes that the NHL’s growing concerns about the long-term damage of concussions and head injuries will keep the league from eliminating fights altogether.

Fights can certainly lead to concussions. But if fighting is taken away, Rockerbie said, players will settle scores in ways that cause more serious injuries: head shots, sticks to the face, knee-on-knee collisions.

The NHL is already facing multiple lawsuits from players accusing the league of failing to inform them about the risks of head injuries. Perversely, fighting could be a guard against more serious harm on the ice.