Despite Mexico City’s efforts to be bike-friendly, the chaotic metropolis is lethal for cyclists.

On Nov. 17, a 21-year-old woman who was using one of the city’s bike-share cycles was mowed down by a bus (link in Spanish). She was riding on a lane marked for bikes and buses. Two days later, another cyclist was killed by a semi-trailer truck. Both accidents have sparked outrage about officials’ inability to ensure cyclist safety even as they encourage more people to ride.

“We can’t tolerate speeches and programs without funds because without money, good intentions won’t lead to any results,” biker-rights groups said in a letter to the authorities (link in Spanish) in which they requested a commitment of 200 million pesos (about $12 million) to improve biking infrastructure. The biking advocates say they’ve recorded 22 cyclist deaths in Mexico City so far this year. The official count, meanwhile, is nine (link in Spanish).

Mexico City has been pushing a series of bike-friendly policies as it tries to curb traffic and pollution. In 2007, it started clearing one of the city’s main thoroughfares (link in Spanish) from car traffic on Sundays, so bikers, skaters, and pedestrians could take over.  In 2010, it started a bike-share program, which has since offered nearly 29 million rides (link in Spanish). The program, called Ecobici, is used by 100,000 people every week, officials say.

But the city’s traffic, considered among the world’s worst, is still wild and unwieldy, even to locals. Nearly three people are killed daily in traffic accidents in Mexico’s Distrito Federal, which encompasses a large swath of Mexico City, and another 20 are injured, according to government statistics from 2011 (link in Spanish, pdf, p. 66), the latest figures available. The data doesn’t break out the number of dead or injured cyclists, but bike accidents in general are on the rise. 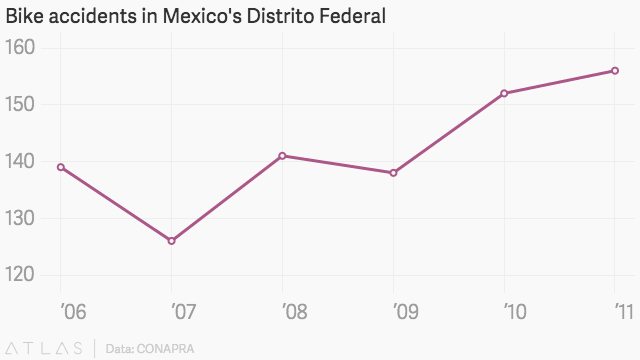 On Nov. 22, dozens of riders, along with relatives of the biker killed on Nov. 17, gathered to paint a butterfly-winged cyclist (link in Spanish) at the accident site, as a memorial. Since both of the fatal accidents last week, the city’s government has launched an ad campaign to educate drivers (link in Spanish) to watch for cyclists, and has said it will hand out up to 40,000 reflective pink vests. The city also plans to  launch new set of traffic rules next month that give pedestrians and cyclists (link in Spanish, pdf, page 3) priority.