In the run-up to a presidential election in which a vociferous businessman-turned-reality-TV-star and a retired neurosurgeon with some unconventional theories have risen to the top of the polls for a major party, even the American people are beginning to question their own political sense.

Just 34% of Americans say they have a very great—or even just a good—deal of confidence in the wisdom of the American people when it comes to making political decisions, according to a new national survey by Pew Research. The figure, based on more than 6,000 interviews conducted between Aug. 27 and Oct. 4 of this year, has sunk from 57% in 2007 and 64% in 1997. 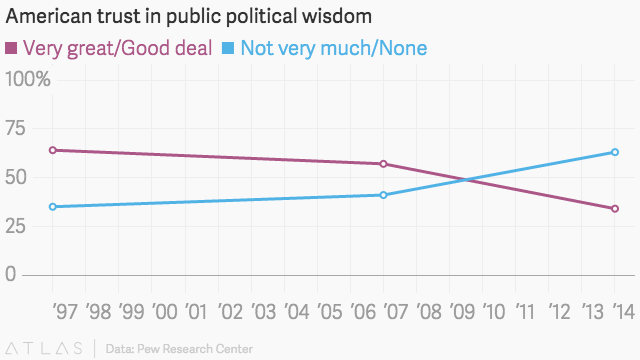 The loss of confidence spans both sides of the political spectrum: only 36% of Republicans and 37% of Democrats expressed having at least a good deal of trust and confidence in the public’s political wisdom, down from 61% and 57% respectively in 2007. 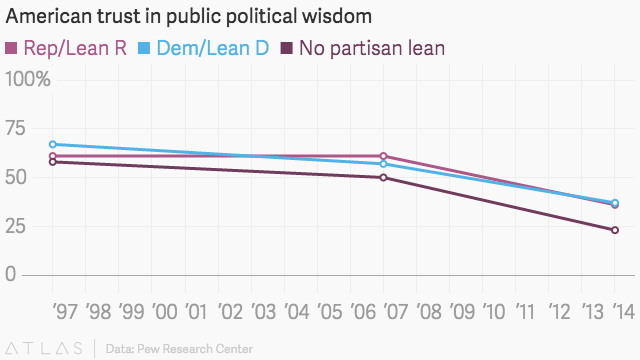 Not only is confidence in Americans’ political choices waning—hardly a surprise in a climate plagued with partisan squabbling—a majority suspects that the US and its leadership are perhaps in over their heads when it comes to the nation’s pressing problems. More than 55% say they believe that most of the big issues facing the country today do not have clear solutions.

Despite all the skepticism, most Americans still trust one another more than those in office, highlighting the sharp disconnect between lawmakers and those they serve. About 55% of the Pew survey respondents said ordinary Americans could do a better job of solving the country’s problems than elected officials can.