The US’s heroin epidemic is not only killing Americans. It’s also increasing the homicide rate in Mexico’s poppy-growing regions.

In the Mexican state of Guerrero, one of the country’s top heroin-producing areas, this year has seen 1,651 murders so far, surpassing the 1,514 recorded in all of last year, according to government data released Nov. 23. Though the numbers are still down on a brutal spike in 2011-13, the general trend is upwards. Since 2007, annual murder cases have more than doubled, making Guerrero the state with the highest murder rate (pdf, p. 3) in all of Mexico. 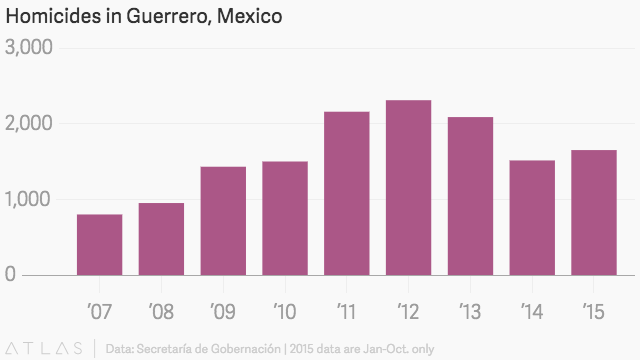 Another thing that has roughly doubled in that period? The number of heroin users in the US. 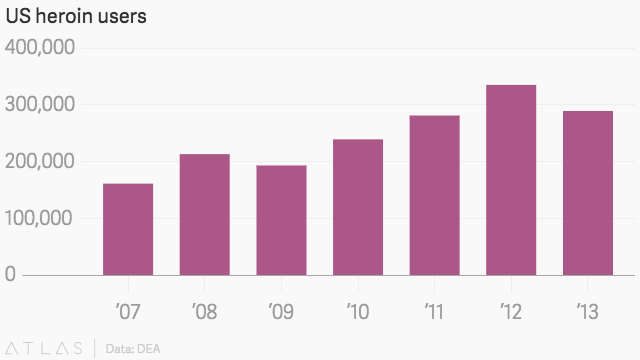 To supply the growing market, Mexican cartels are seeking to expand their heroin business in the US, according to a recent DEA report (pdf). Heroin seizures at the US-Mexico border more than doubled between 2010 and 2014 as the cartels ratcheted up smuggling. Seizures have also gone up nationally. 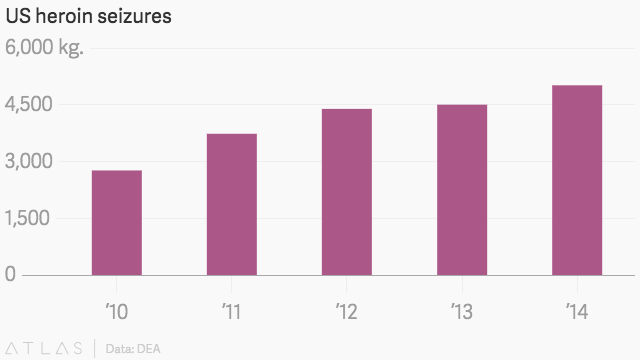 In 2014, opium poppy cultivation in Mexico reached 17,000 hectares (42,000 acres) with the capacity to produce 42 metric tons (46 US tons) of heroin, the DEA report states. Poppy cultivation has increased (pdf, page 6) in the country, mainly in Guerrero and three other states, an agency official told US lawmakers last month. The increase, he said, “impacts both of our nations, by supporting the escalation of heroin use in the United States, as well as the instability and violence growing throughout areas in Mexico.”

There are no hard data on the extent of poppy plantations in Guerrero, but experts estimate the state accounts for half or more of national production. Better known for its resort town of Acapulco, the southern state’s mountainous and secluded terrain—along with its lawlessness—also make it an ideal location to grow poppies, Chris Kyle, an anthropology professor at the University of Alabama at Birmingham who has studied Guerrero, tells Quartz.

While there was only one drug trafficking group operating in the state in 2008, there are now at least nine, according to Kyle’s research (pdf, p. 7). With their presence, crime has grown too, from turf wars over poppy-growing land to extortion to kidnappings.

Not all the deaths are directly related to the production and distribution of heroin, but the drug is what lured the cartels to the state and remains a mainstay of their business. “If you take that away, then the organizations would wither and die,” said Kyle.