Chicago was rocked by protests on Tuesday night (Nov. 24) after mayor Rahm Emanuel released a graphic dash cam video showing a white police officer killing a black teenager with a hailstorm of 16 bullets in October 2014. Laquan McDonald was one of 70 people killed by the police in the city in recent years.

Officer Jason Van Dyke appeared in court Tuesday and was charged with first-degree murder for the death of 17-year-old McDonald. Following the release of the police footage of the killing, hundreds of people took to the streets of the city, chanting “16 shots.”

The protests, which went into the early hours of Wednesday, were largely peaceful, in contrast to unrest in Ferguson and Baltimore earlier this year over police brutality. Demonstrators marched through Chicago blocking street intersections and chanting in front of a police station.

The footage is so disturbing, that the Chicago public school system said it would offer counseling to children who had seen it, NBC Chicago reported.

The video was released as a result of a lawsuit brought by Brandon Smith, a freelance journalist, who said he was barred from the press conference during which the footage was released.

Another reporter asked Smith’s question, which was answered by Garry McCarthy, the police superintendent. He said the police are working on the problem, and that police shootings in the city are down by 70%, although the time frame is unclear.

A report published earlier this year by the Better Government Association (BGA), which compiled fatal police shootings in large US cities from 2010 to 2014 found that Chicago, with 70 deaths, topped the list. Phoenix came in second, and Philadelphia third. 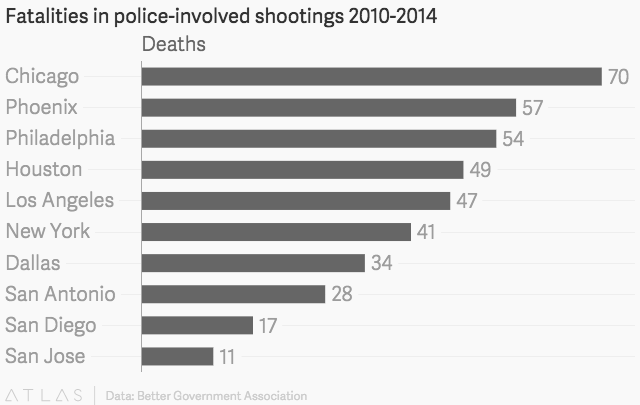 The report also found that Chicago’s Independent Police Review Authority investigated 400 police shootings since 2007, and found only one to be unjustified. The BGA said that while blacks account for about one-third of Chicago’s population, they made up at least two-thirds (46) of all the fatal shootings. This disproportion reflects a national trend.