It’s that time of year when Wikipedia opens with a banner on its site, asking for donations.

It used to be a picture of its founder, Jimmy Wales, in a meme-worthy plea for donations:

Now, it’s a straightforward reminder that donating the equivalent of a cup of coffee would make a lot of difference for the world wide web’s 7th most visited site.

The fundraising, which benefits the Wikimedia Foundation—the nonprofit operating Wikipedia and its related sites—is aimed at keeping the project running in the fiscal year 2015-2016, with a budget estimated at $68 million, Wikipedia told Quartz.

Wikipedia is not in dire straits, and generally raises more money than it needs; still, everyone who uses it and can give it a few dollars should, for the mere pleasure of being part of it.

For those who love the democratic potential of the web and cherish the ideal that knowledge be accessible and free in all corners of the world, Wikipedia is proof that the internet can be owned by its users. Indeed, recent history supports the notion that the site is a common good: it is not large donations that keep Wikipedia alive (for 2014-2015, donations over $1,000 accounted for less than 15% of the total) but individuals who give up to $100. 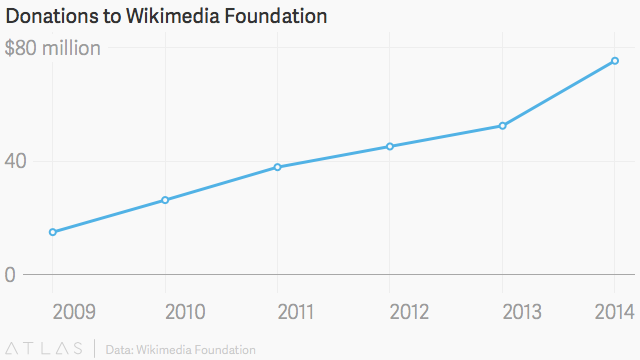 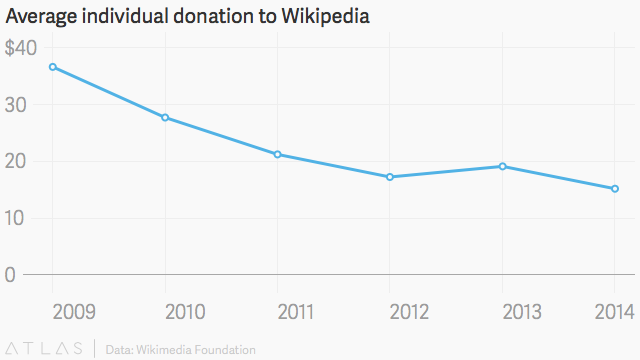 This trend is particularly apt for what’s arguably the largest public resource on the internet: of the biggest sites online, Wikipedia is the only one to be not-for-profit, and not trying to make money off of users. Since 2009, Wikipedia has more than doubled in size in terms of articles, and its reach is astonishing: 500 million unique visitors and 18 billion page views per month. Wikipedia now counts over 36 million articles in over 250 languages: 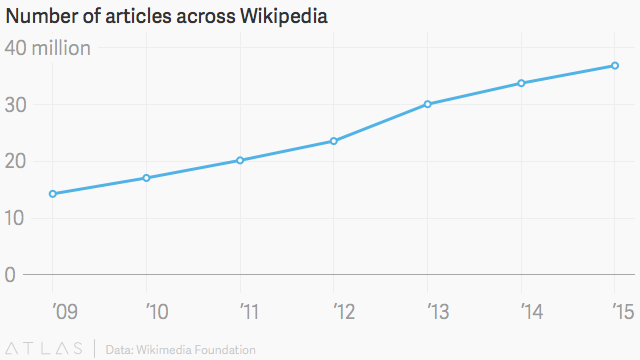 Its importance as a reference, and the cultural function it plays is unmatched. English Wikipedia alone counts over 5 million articles; by comparison, the Encyclopædia Britannica online, the second-largest English language repository of knowledge, has 120,000. When something is in the news—Star Wars, J. J. Abrams, presidential candidates—people head to Wikipedia to search for answers (OK, Google is where they search, but Wikipedia is where they end up). It serves a role that used to be a public library’s.

What’s more, Wikipedia is a truly collective effort. Aside from the 280 employees of the Wikimedia Foundation, everyone else is a volunteer. There are 127,601 active editors, 75,000 of which work in any given month. Sure, this means Wikipedia isn’t written by experts, and its information isn’t always accurate—though good enough for readers to understand what something is and trustworthy enough to settle a dinner table dispute. Yes, its community of writers and editors is too Western, too rich, too white, too male—and the articles reflect their biases. Indeed, Wikipedia reflects the skewed power dynamics of society.

But it is also ours to make, change, and improve.

Wikipedia is primarily an unparalleled, massive cooperative project that encompasses all continents. It transversally acts as an instrument to preserve dying languages, to promote digital literacy in languages other than English, and to ease the reciprocal knowledge of different cultures.

It’s easy to take it for granted, but it’s properly awe inspiring.

Wikipedia is the only web-based project of its size that belongs to everyone—and giving it some dollars is a good way to make that ownership more tangible. It’s like becoming investor in a public good. All the enormous online endeavors out there are for profit—Facebook, Twitter, Google, Amazon, you name it. The services we use on a daily basis make money off us, our purchases, our data, our connections. If Wikipedia monetized its traffic the way Google does, it would be worth many billions of dollars ($10 to $30 billion, according to some estimates)—it doesn’t, and we have to make sure it never needs to.

So even if the site doesn’t need it desperately, buy that coffee for Wikipedia. Or edit a story, start a new article, work on a translation. Do your part—this year, next, and till you’re ready to face a family holiday with your family without being able to look something up on Wikipedia and prove them wrong.