A standard Thanksgiving dinner, including a large turkey and all the trimmings, is expected to cost $50.11 this year, up slightly from last year’s $49.41, according to the American Farm Bureau Federation (AFBF), a farming lobby. Some other private estimates put the price far higher.

The largest jump in the price of any one ingredient, according to AFBF statistics, comes from the turkey, which is now an average $23.04 for a 16lb (7.3kg) bird. That’s up by $1.39 from a year earlier, mostly due to an outbreak of avian flu earlier in 2015.

Remarkably, the AFBF’s Thanksgiving shopping list has remained unchanged since 1986. (It is also not adjusted for inflation, meaning some Thanksgiving meals felt even more expensive in the 1980s.)

Among the list are core items as sweet potatoes (yams), cubed stuffing, and fresh cranberries, in addition to the 16lb-turkey. In addition to those, there is half a pint of whipping cream, green peas, “miscellaneous ingredients,” a gallon of whole milk, a pound of relish (described as carrots and celery), and rolls. What’s not included: wine, beer, or any other snacks and treats on the side.

Here’s how prices have changed over the years: 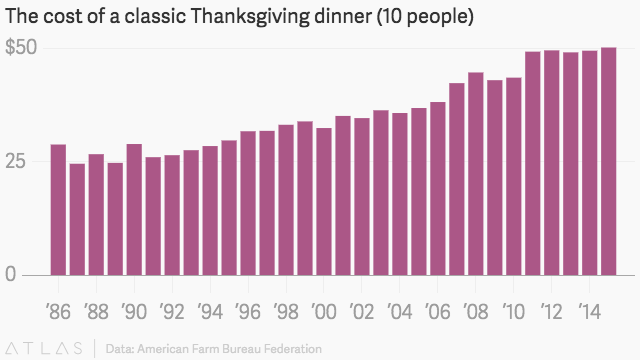 “Turkey production is down this year but not dramatically,” said John Anderson, the ABFB’s deputy chief economist, referring to effect of the aviation flu outbreak. Anderson also said that retailers’ discounts were swallowing much of the increased price.