It’s not just big business; merger mania has hit universities across Europe. Since 2000, the number of university mergers increased substantially and almost 100 mergers have taken place, according to a report by the European University Association. 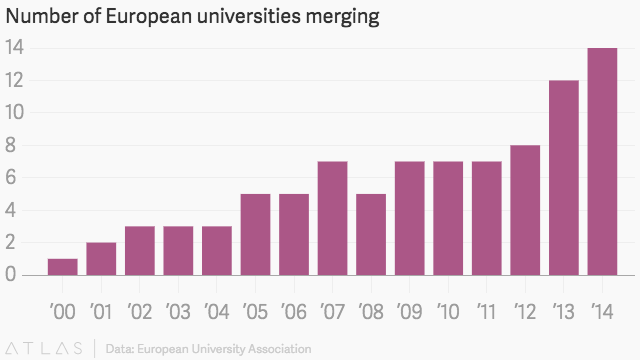 Denmark kickstarted merger fever in 2007, halving the number of institutions in the country. Belgium followed between 2009-2011. A series of individual mergers resulted in the broader trend of establishing university communities in France; the world-famous Sorbonne could become part of a much larger Paris university in the next few years.

Mergers have been a more isolated phenomenon in Germany, Italy, Portugal, and the UK. Estonia has cut its universities by a quarter.

In an increasingly difficult economic environment, mergers could be particularly appealing to universities faced with funding cuts. Traditional modes of funding has dramatically changed in the last few years, which is particularly significant in Europe, where universities have been more reliant on public funding. Higher education in the UK, for example, was hit with significant cuts in 2010; since then, there have been six mergers. London’s increasingly market-driven universities are also spending $6 billion to lure overseas students.

It’ll take some time to say what impact all these mergers will have. University mergers involve more than just combining departments; balancing savings with retaining the institutional culture needs to be considered. Success is not always guaranteed.