The NBA is about to lose one of its best—and most bankable—players. When Kobe Bryant retires at the end of this season, he will leave behind a formidable legacy, measured in both points and dollars.

The loss for the Lakers, and the NBA, goes beyond the court. Throughout his 20-year career, Bryant became one of the most commercially successful stars in sports. His time with Lakers coincided with the team becoming the most valuable franchise in the NBA, currently worth some $2.6 billion, according to Forbes.

This explains why Jim Buss, part-owner of the Lakers, vociferously defended a controversial extension the team offered Bryant two years ago. The two-year, $48.5 million deal ensured that Bryant, despite his waning play and frequent injuries, remained the highest paid player in the league for the sixth and seventh consecutive years. As Buss told the Los Angeles Times, ”Let’s break down what he did for us, then say, what is he worth? To me, he’s worth that.”

Bryant’s endorsements range from Nike to Lenovo, Mercedes Benz, and Coca Cola. Despite not playing much over the past two seasons—during which the Lakers have struggled—Bryant remains one of the highest revenue generators for signature shoes: 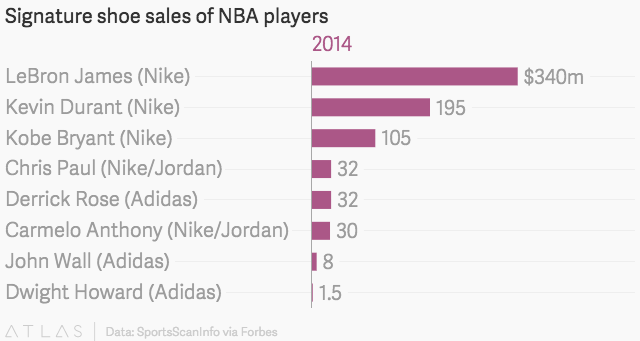 His jersey is also one of the best selling in the US. And more importantly for a league with global ambitions, his jersey is the most popular in China.

With Bryant’s impending retirement, expect these sales to go even higher. The news has already had an effect on ticket prices for games featuring the Lakers, sellers told ESPN.com.

And Bryant won’t fade quietly into retirement. He founded a company last year, Kobe Inc., that will act as a sort of venture capital firm for sports-related businesses. “At this stage in my life, I don’t have the interest in taking on any more endorsements,” Bryant told ESPN.

Revealing the scale of his ambitions, one of his company’s recent deals includes a distribution deal with Chinese online retail giant Alibaba to sell all Kobe-branded merchandise in the country. “Kobe is an innovative entrepreneur who has established a legacy that extends far beyond the basketball court,” said Alibaba boss Jack Ma.