Apple Pay may be the most buzzed about mobile wallet, but so far that hasn’t translated into actual usage by consumers.

InfoScout, a research firm, collected data from 300,000 shoppers on Black Friday to see whether they used mobile wallets when shopping, and found nearly half as many eligible purchases were made using Apple Pay this Black Friday than last year, when the service was barely a month old. 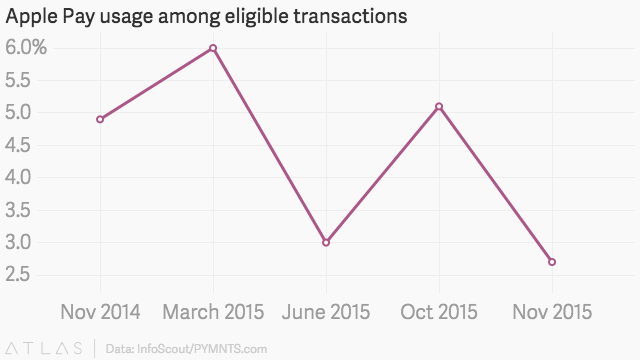 Notably, InfoScout didn’t track in-app payments made through Apple Pay. AirBnb, Uber, Target, and Best Buy, among others, have added let consumers use Apple Pay for purchases made inside their apps. Considering the popularity of mobile shopping this holiday season, the usage could be significant.

That said, the findings highlight the uphill battle Apple is facing in driving mainstream adoption of its mobile wallet. The service launched late Oct. 2014 to much fanfare, but it ran into issues early on. Retailers were wary about supporting Apple Pay, and it was only available on Apple’s newest phones at the time. Consumers remain concerned about the security behind Apple Pay—despite the fact it’s more secure than standard credit and debit cards.

But the data from InfoScout is surprising, considering Apple has continued to market the service heavily and has steadily added retail partners, including Best Buy and Kohl’s. In addition, Apple Pay is now available on the iPhone 6S, 6S+, 6, 6+, and the Apple Watch. Given all those developments, it would be reasonable to expect greater usage of Apple Pay this holiday season, but it looks like consumers are still much more comfortable pulling out their credit cards than waving their iPhones.