Last month, Chipotle quietly made a small change to its website. On its “food with integrity” page, which touts the company’s commitments to freshness and sustainability, a description of “buying local” was replaced with one about “long-term partnerships.” Specifically, Chipotle removed this claim: “We serve more local produce than any restaurant company in the US.”

That change, first noticed and reported by Bloomberg on Dec. 2, is partly related to new protocols that Chipotle is outlining for its suppliers as it recuperates from a series of food-safety incidents this year. Last month, Chipotle temporarily shuttered more than 40 locations in Washington state and Oregon as health officials investigated dozens of cases of E. coli linked to its restaurants. Chipotle also has been connected to norovirus and salmonella outbreaks this year.

Chipotle spokesman Chris Arnold says in an email that the company “removed a reference to our local produce program as it has gone largely out of season” and “because there will be some changes to supplier requirements, chiefly in the areas of testing, and we don’t know what the local program will look like as it comes back in the season next year.” Arnold adds that Chipotle “didn’t want to be over promising” on its local program for 2016, “as we do believe some of those suppliers will not meet those new standards.”

The dial-back on local suppliers is the latest blow to Chipotle’s “food with integrity” program. Earlier this year, Chipotle pulled carnitas from about a third of its restaurants after suspending a supplier that violated its pork-raising standards. In that case, the company turned the setback into a marketing win, framing it as a decision to stick to ethics-minded food protocols at the expense of short-term sales.

Other incidents have gone less smoothly. In late August, Chipotle was sued over anti-GMO advertising it introduced in April. The plaintiffs alleged that Chipotle was misleadingly marketing menu items as GMO-free when, “in fact, Chipotle’s menu has never been at any time free of GMOs.” Chipotle maintains that this lawsuit is “meritless.”

At least some of the effect of all this is visible in Chipotle’s same-store sales growth, which has slowed steadily over the last year and a half. The deceleration looks particularly stark compared with the double-digit growth Chipotle posted throughout 2014. 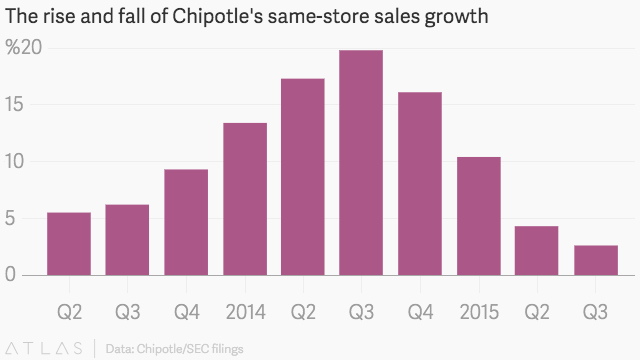 Chipotle’s “food with integrity” stumbles aren’t enough to explain its entire decline in same-store sales growth. But it’s enough to make you wonder whether the “food with integrity” promise has been more trouble than Chipotle bargained for. If so, it might explain why on the particular issue of local suppliers, Chipotle is ready to recalibrate—even if it means giving up that biggest-server-of-local-produce title.