Collectively, these companies controlled 65% of the global wearable market share in the third quarter: Fitbit with 22.2%, Apple with 18.6%, and Xiaomi with 17.4%. Of course, in such a new product category, market share can be volatile, but they are far ahead of the No. 4 player, Garmin (4.1%), which largely caters to hard-core runners.

What’s interesting about the Big Three is the rapid ascension of Apple and Xiaomi, relative newcomers to the wearable markets. Xiaomi debuted its $15 fitness band in July 2014 and shot up to the No. 2 spot in the first quarter of 2015—and it isn’t even available in the US yet. In the next quarter, Apple overtook Xiaomi with the debut of its smartwatch, which ranges in price from $350 to $17,000. 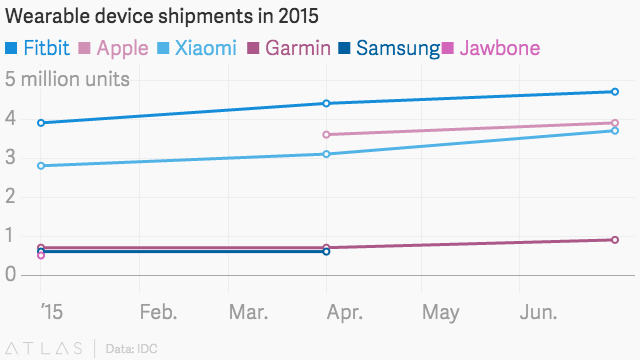 Meanwhile, two early players who helped push forward the idea of tracking fitness via wristbands and smartwatches have completely dropped off from IDC’s list of the top five wearable vendors by shipments.

One is Jawbone, which launched its Up band in 2011, two and a half years before Fitbit released its first wristband, Flex. Despite a collaboration with design superstar Yves Behar, Jawbone’s band was plagued with quality issues, including a recall for its first version. (Since IDC only provides data for the top five vendors, Jawbone has only one data point in the above chart: a solitary pink dot on the bottom left.)

The other is Samsung. Though it released six smartwatches before the Apple Watch went on sale, it fell off from the top five list in the third quarter, shortly after Apple entered the market.

It just goes to show the first-mover advantage is no guarantee of long-term success.