China’s Bank of Jinzhou started trading in Hong Kong today (Dec. 7), and its shares closed up with a healthy 8.5% gain. This is despite the bank’s close ties to under-investigation Hanergy Thin Film Power, the fact that China’s banks are being probed by regulators at a frantic clip, and Jinzhou’s inability to attract long-term corporate investors known as “cornerstones” in Hong Kong.

In fact, things were looking pretty grim for the bank until the late afternoon—the stock traded under its HK$4.70 IPO price for most of the day, until it popped up in the final minutes of trading: 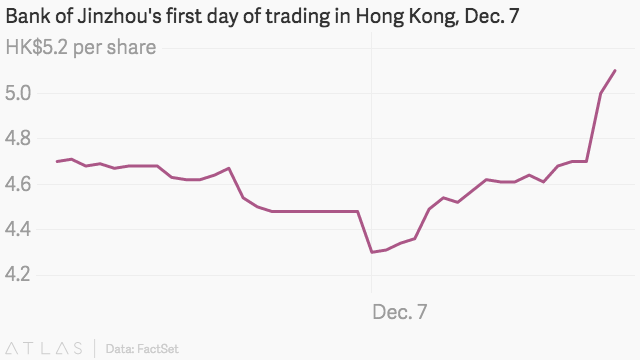 This is a familiar pattern for stocks trading in mainland China, and one that suggests some sort of manufactured support. When the government was trying to prop up China’s stock market this summer, it wasn’t unusual for the moribund Shanghai Composite Index to suddenly jump at the end of the trading day, closing higher than it had opened. This close-of-trading pop has became so regular that analysts openly speculate when they think state funds are stepping in, and some investors have come to depend on the ”Beijing boost.”

Bank of Jinzhou is owned by the local government in the northeastern province of Liaoning, but it is impossible to say at the moment what was responsible for the bank’s end-of-day pop. Still, the hints of Beijing-style manipulation in Hong Kong, which recently opened to mainland Chinese investors, are hard to ignore.