You probably should think twice before joining the girl’s soccer team. The increasingly popular sport is one of the most dangerous to play at any American high school.

Girls soccer has been on the rise since the US womens team won the World Cup in 1999, and has only been boosted by the team going on to win the World Cup for a third time this year—the most watched soccer game in US television history. The number of girls in high-school soccer programs increased by 45% between 1999 and 2014.

But as high-school participation of the sport increases, so do injuries. A study analyzing injury rates of high school sports found girls’ soccer to not only be more dangerous than boys playing the same sport, but also more hazardous than boys ice hockey, boys wrestling, and boys lacrosse. In fact, girls soccer only comes second to football—which was not separated by gender—as the most dangerous high school sport. 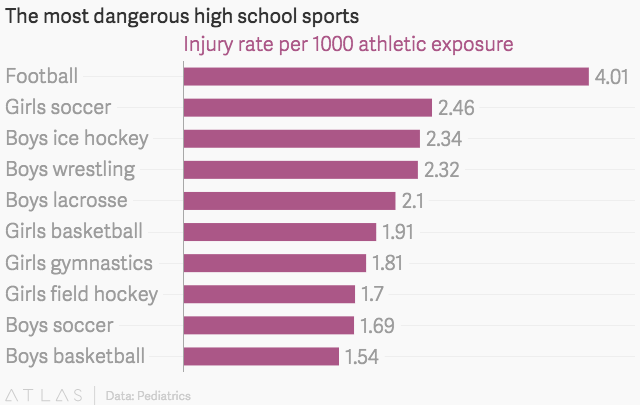 Researchers collected the data from the National High School Sports-Related Injury Surveillance System and High School RIO (Reporting Information Online). The results, detailed in the journal Pediatrics, shows football and girls soccer to the most dangerous sports, while swimming and diving to be the safest. 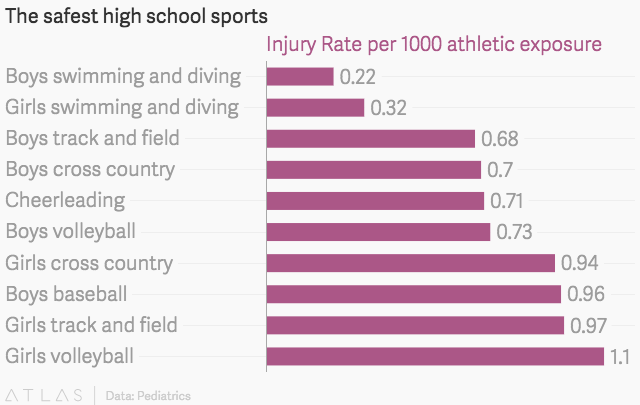 It’s remains unclear as to why rate of injuries in soccer differs so dramatically between girls and boys; some suggest that differing injury rates and type of injuries could be down to different styles of play, or girls could simply be more forthcoming about their injuries.

Previous research has shown that most injuries for girls playing soccer were located in the lower extremity; the most frequent being ankle sprains. Other studies—which also found a higher prevalence of injuries in female players— showed girls were more likely to have an increased risk of anterior cruciate ligament (ACL) tears—which is a common knee injury— and concussions during training situation, but boys had a greater risk of injury during competitions.