A critical announcement is expected in the next few days—and could come as soon as today (Friday)—that will completely alter the way massive piles of money change hands in the music business.

For background: In the US, most AM/FM radio stations get to broadcast music nearly for free, but online and satellite radio services must pay a royalty rate to play performers’ sound recordings. Pandora, iHeartRadio, and SiriusXM’s internet branch are among these services. They’re currently required to pay $0.0014 to $0.0023 per stream per person—which seems like very little, but actually comes out to millions of dollars a year mounting to billions of dollars over a few years.

Sometime in the upcoming week, though, that number is going to wobble. The Copyright Royalty Board, a three-judge panel that sets terms for copyright licenses and royalties collected by the US Library of Congress’s copyright office, is due to settle on a new royalty rate by Dec. 15, which will be in effect from 2016 to 2020.

Naturally, Pandora and co. are fiercely advocating for a lower rate (in the range of $0.0011 per stream per person) while royalty-distribution company SoundExchange, which represents record labels, wants an increase (to $0.0025). These tiny fraction-of-a-penny tweaks could either give people on the music-creating side a lot more money than they’re currently making—or relieve some of the massive expenses incurred by radio streaming companies, which spend as much as $500 million a year in royalty payouts. But only one side can win.

The tension doesn’t stop there, either. Though the CRB decision only concerns online radio services, on-demand music services like Apple Music and Spotify will also feel the rippling effects of whatever new rate is implemented, because artists will either have greater or weaker leverage to negotiate rates with all services in the free market; so, very soon, either artists or streaming services at large are going to end up a fair bit richer.

If the winner is streaming—the fastest-growing sector of the music industry right now—these companies’ business models stand to flourish. But if the CRB decides to hike the rate, some streaming services may find themselves buckling under the extra weight. 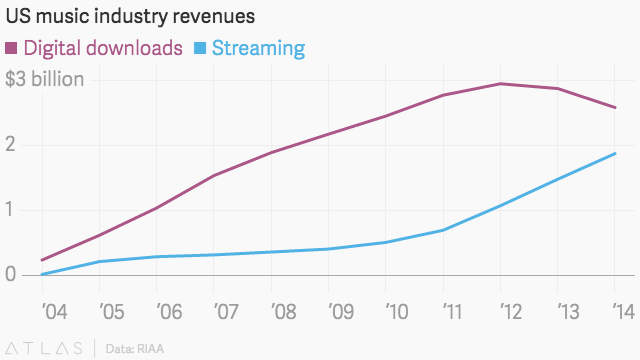